Kingscliff is a coastal town just south of Tweed Heads in the Northern Rivers region of New South Wales, Australia, and is a beach community offering a variety of holiday accommodations. Together with the villages of Chinderah and Fingal, it is a tourist destination that provides beach and estuary access for swimming, surfing, fishing and water sports. 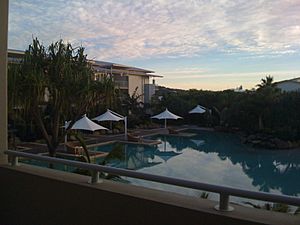 View of a holiday resort, Kingscliff, 2009

Its main street, Marine Parade, contains many cafes, shops and accommodation located directly across from Kingscliff beach and creek. The town also has two primary schools and a state high school.

An oceanway allows pedestrians and cyclists to move from the historic centre of town out to the emerging new communities along the Tweed Coast in a sustainable manner.

Kingscliff was the home to Peter and Jeremy Oxley who formed the 1980s band, The Sunnyboys.

A scene from the film Aquamarine was filmed on Marine Parade in late 2007.

The main Kingscliff beach has been severely affected by erosion, with portions of the caravan park and beachside carparks being threatened or reclaimed by the sea. In December 2014, the state environment ministry announced it would split with Tweed Shire the $300,000 cost of an environmental impact study for a plan to build a 500-metre seawall and fill in the beach with imported sand.

In March 2016 work began on the Kingscliff Foreshore Revitalisation Project which will be rolled out in 3 stages. Stage 1 involves building a new seawall to save the Cudgen Headland Surf Life Saving Club, Kingscliff Beach Holiday Park and Kingscliff Beach Bowls Club from erosion. Stage 2 is to refurbish Kingscliff Beach Holiday Park, meaning a roll back of camping facilities with a focus on cabins. Stage 3 will be focused on creating a more community oriented space for tourists and locals alike with the development of Kingscliff Central Park. The park is expected to become the new social hub of Kingscliff and make the transition from the main street to the beach more streamlined. It will also result in far better beach views for businesses on Marine Parade.

A number of well-known sporting teams represent the local area, including the Cudgen Hornets, the local rugby league club, who play their home games at Ned Byrne Field. In September 2009, Kingscliff hosted a stage of the World Rally Championship.

Kingscliff Wolves Soccer Club was founded in 1968. The club's home ground is the Walter Peate Oval. The club competes in the Gold Coast Premier League, where it has been one of the leading sides for the past few decades.

There are many bike paths for local cyclists through the parks along Kingscliff's beaches. The neighboring locality of Salt, part of the small town of Casuarina, is accessible via a bike path.

All content from Kiddle encyclopedia articles (including the article images and facts) can be freely used under Attribution-ShareAlike license, unless stated otherwise. Cite this article:
Kingscliff, New South Wales Facts for Kids. Kiddle Encyclopedia.