Ocean Shores is a coastal town in the Northern Rivers region of New South Wales, Australia. Established in 1969, Ocean Shores was originally a land holding owned by Wendell West of Washington with backing from American singer Pat Boone, and was named after Boone's residence in Ocean Shores, Washington. It is located in the Brunswick Valley – a valley including the towns of Mullumbimby and Brunswick Heads. The town has a local shopping complex and a large golf course. At the 2016 census, Ocean Shores had a population of 5,137 people.

Ocean Shores has a subtropical climate throughout the year. Summer is generally warm to hot with a few days reaching above 30 degrees. Winter is cool to mild with around two days under 14 degrees. Normal day maximums are around 20 degrees. Spring and Autumn are mild to warm, with maximums around 25 and higher with few days below it. Winds come from all directions which means there are warm northerly days or mild southerly days. Spring is dry and windy. Thunderstorms are also common in Summer. 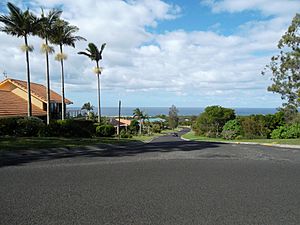 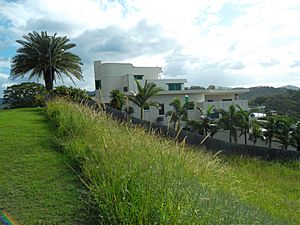 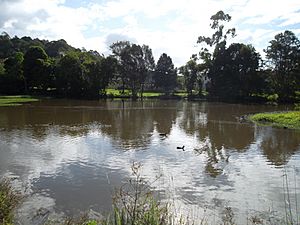 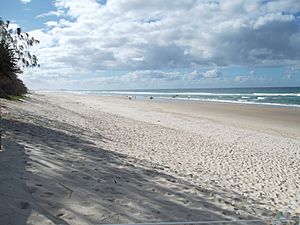 Ocean Shores has a local bus service five times per day, linking the greater Ocean Shores community, Brunswick Heads, Mullumbimby, Byron Bay and Ballina. Ocean Shores is located between two airports, Ballina to the south, which has daily flights to Sydney and Melbourne, and Gold Coast to the north, which has daily services to most major Australian cities and a few international destinations. The closest closed railway station is at Mullumbimby, a 10-minute drive south. In the past, train service travelled down the North Coast line to Sydney, but the Murwillumbah line closed on 19 May 2004 and services now depart from Casino with NSW TrainLink operating road coaches.

The people of Ocean Shores live in a coastal and estuarine environment. They experience one of the most beautiful areas of the East Coast of Australia. The area has a mix of newcomers from all over the world, as well as old timers, who have lived in the district all of their lives. Members of the Midjimbul / Durumbil clans are the traditional custodians of the area. There are Aboriginal sites in the area, including Middens along Marshalls Creek. The area is rich in indigenous heritage. The Brunswick, which included the Ocean Shores area, was the first place of European settlement in what is now called the Byron Shire, dating back to 1846.

The Ocean Shores Community Association (OSCA) and its predecessors, have worked for community issues in the Ocean Shores district, since the town was founded in 1969.

The Ocean Shores Arts Expo began in 2004 when a group of residents who had come together during the Pacific Highway planning controversy decided to create something uplifting, creative and positive for the community. Lions of Brunswick/Mullumbimby straight away supported the project as a worthy cultural event to bring community together, and provided funding and many willing hands to help. Local history has been an important corner stone of the Expo every year with our local historian Frank Mills. The Art Expo has taken place over a weekend in August every year. The next Art Expo will be in 2012. The venue is the Ocean Shores Public School, Shara Blvd, North Ocean Shores. Patrons can view art and sculpture, listen to local musicians and enjoy drinks and nibbles. Then over the weekend there are local musicians performing, art demonstrations, the Youth art show, a community artwork, and the Artists’ café.

The Ocean Shores and surrounding area established a business networking group in 2012, called Business Ashored, to promote and support trade and the local economy.

All content from Kiddle encyclopedia articles (including the article images and facts) can be freely used under Attribution-ShareAlike license, unless stated otherwise. Cite this article:
Ocean Shores, New South Wales Facts for Kids. Kiddle Encyclopedia.