Ocean Shores is a city in Grays Harbor County, Washington, United States. The population was 5,569 at the 2010 census. 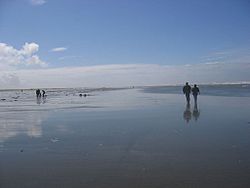 Digging for razor clams on the beach

The City of Ocean Shores occupies the Point Brown peninsula on the Washington coast. Long before the arrival of European explorers and settlers, the peninsula was used by the various local tribes for trading and other purposes. The Chinook, Chehalis, and Quinault Tribes used the area, as well as others that now make up the Quinault Indian Nation.

On May 7, 1792 Captain Robert Gray sailed into the bay and named the area Bullfinch Harbor. Later, Captain George Vancouver renamed the area after Captain Gray, now called Gray's Harbor. The first white established settler on the Point was Matthew McGee, who settled in the early 1860s. He sold the southern portion of the peninsula to A.O. Damon in 1878 for a trading supply center whose dock extended into the Oyehut channel. A.O. Damon took over the entire peninsula from McGee with the land passed along to his grandson, Ralph Minard, who used the area as a cattle ranch from 1929 until he sold to the Ocean Shores Development Corporation in 1960 for $1,000,000.

At the time the Washington State legislature was considering legalizing some forms of gambling. In expectation of a huge casino development, the Ocean Shores Development Corporation opened their sale of lots in a travel trailer parked in the dunes. Soon the word spread about the California-style development of the place called Ocean Shores. The price of lots began at $595 and were sold sight unseen from the first plat maps. As the numbers of lots sold rose, the prices rose. Property lots were staked and numbered only as the road construction crews began to lay out the massive road system. Even though the first roads were only 20 miles (32 km) in length, the downtown area had mercury vapor lights to show that this was a booming city. In the first year 25 homes were constructed and their owners had charter membership certificates in the Ocean Shores Community Club.

As the development grew, the Ginny Simms Restaurant and Nightclub brought in the Hollywood set. In fact, on Grand Opening night chartered planes flew up a whole contingent of Hollywood stars, and 11,000 people turned out at Bowerman Basin to see the celebrities.

By December, 1960, 25 miles (40 km) of canals were planned, a six-hole golf course was drawing players, and the mall shopping area was ready for the 1961 Ocean Shores Estates construction boom. The mall, 100 motel units, three restaurants and the airstrip sprang up from the sandy ground with the marina opening in 1963. The SS Catala was brought up from California to become a "boatel" and charter fleet office. Two years later a southwest winter storm drove her into the sand and for many years she was the most famous shipwreck on the Washington Coast. In 1966 the famous gates to the city were installed.

Pat Boone became a local resident in 1967 as a stockholder in the Ocean Shores Estates Incorporated and promotion of the development was sped along by the famous Celebrity Golf tournaments hosted by Boone.

By 1969 Ocean Shores was declared the "Richest Little City" with an assessed valuation of $35 million and 900 permanent residents. The following year the city was incorporated with a planning commission formed to zone the city and codify streets. The city's first school opened in 1971 and road paving on streets began in earnest.

During the 1970s, the town struggled through many setbacks brought on mainly by the state's economic recession. By the 1980s, the slump was over and construction of homes and businesses increased.

The climate is similar to nearby Aberdeen, situated slightly farther inland, but Ocean Shores experiences a narrower range of temperatures and is significantly less susceptible to extremes of heat in the summer, caused by hotter, inland air masses being pushed into the region.

There were 2,707 households of which 14.6% had children under the age of 18 living with them, 49.9% were married couples living together, 7.8% had a female householder with no husband present, 3.4% had a male householder with no wife present, and 38.8% were non-families. 30.5% of all households were made up of individuals and 14.4% had someone living alone who was 65 years of age or older. The average household size was 2.06 and the average family size was 2.49.

There were 1,789 households out of which 17.8% had children under the age of 18 living with them, 56.7% were married couples living together, 7.1% had a female householder with no husband present, and 33.0% were non-families. 27.7% of all households were made up of individuals and 12.6% had someone living alone who was 65 years of age or older. The average household size was 2.14 and the average family size was 2.55.

Ocean Shores is connected to the rest of the county by State Route 115, which connects Point Brown Avenue to State Route 109.

The city is also served by Grays Harbor Transit bus route 50, which travels east to Hoquiam and Aberdeen and north to Taholah on the Quinault Indian Reservation, and a dial-a-ride route for in-city service.

All content from Kiddle encyclopedia articles (including the article images and facts) can be freely used under Attribution-ShareAlike license, unless stated otherwise. Cite this article:
Ocean Shores, Washington Facts for Kids. Kiddle Encyclopedia.