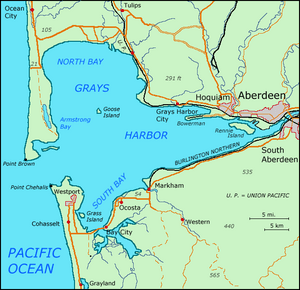 Grays Harbor is an estuarine bay located 45 miles (72 km) north of the mouth of the Columbia River, on the southwest Pacific coast of Washington state, in the United States of America. It is a ria, which formed at the end of the last ice age, when sea levels flooded the Chehalis River. The bay is 17 miles (27 km) long and 12 miles (19 km) wide. The Chehalis River flows into its eastern end, where the city of Aberdeen stands at that river's mouth, on its north bank, with the somewhat smaller city of Hoquiam immediately to its northwest, along the bayshore. Besides the Chehalis, many lesser rivers and streams flow into Grays Harbor, such as Hoquiam River and Humptulips River. A pair of low peninsulas separate it from the Pacific Ocean, except for an opening about two miles (3 km) in width. The northern peninsula, which is largely covered by the community of Ocean Shores, ends in Point Brown. Facing that across the bay-mouth is Point Chehalis, at the end of the southern peninsula upon which stands the town of Westport.

Grays Harbor is named after Captain Robert Gray who discovered and entered it on May 7, 1792 in the course of his fur-trading voyages along the north Pacific coast of North America. Gray named the bay Bullfinch Harbor, but it was afterward named Gray's Harbor by Captain George Vancouver, whose contemporaneous explorations of the region—the ships of the two captains had met at sea, only days earlier—were well publicised at the time, while Gray's voyages were not. Gray's Harbor was the name that stuck (the apostrophe was omitted under US Board on Geographic Names guidelines). A few days later, on May 11 Gray found a navigable channel into the estuary of the Columbia River, and sailed into it, the first white man known to have done so.

Settlement of the area began in the early 1870s and was largely dependent on the lumber industry. As the forests of the eastern United States depleted, many loggers from the East and the Midwest migrated to the Grays Harbor area, as well as many Scandinavians and Finns from Europe.

The Daily Washingtonian was a daily newspaper in Grays Harbor founded by Otis M. Moore.

In the early 20th century, Grays Harbor was the largest lumber shipyard in the world. The Industrial Workers of the World led strikes in the area in 1912, 1917, and 1923. Some of these labor actions were militant, such as an armed union ship shooting at the Fearless, a scab ship in 1906. 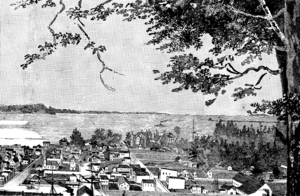 Grays Harbor in 1891 (or earlier?), as depicted in Frances Fuller Victor's Atlantis Arisen.

The schooner Annie Larsen was seized at Grays Harbor on 25 June 1915 by US customs officials, later leading to what was at the time the most expensive trial in US legal history.

All content from Kiddle encyclopedia articles (including the article images and facts) can be freely used under Attribution-ShareAlike license, unless stated otherwise. Cite this article:
Grays Harbor Facts for Kids. Kiddle Encyclopedia.