Hoquiam (/ˈhoʊkwiəm/ HOH-kwee-əm) is a city in Grays Harbor County, Washington, United States. The town borders the city of Aberdeen at Myrtle Street, with Hoquiam to the west. The two cities share a common economic history in lumbering and exporting, but Hoquiam has maintained its independent identity. Aberdeen is more populated, but the two cities have a long rivalry, especially in high school sports (see Sports).

Hoquiam (Ho'-kwee-um, or Ho-kwim, to natives) was incorporated on May 21, 1890. Its name comes from a Native-American word meaning "hungry for wood", so named from the great amount of driftwood at the mouth of the Hoquiam River. In 2010 the population was 8,726.

One of the first logging operations in Hoquiam was established by Ed Campbell in 1872.

About 10 years later, Captain Asa M. Simpson, a Pacific Coast mariner and businessman in the lumber industry from San Francisco, provided the financing for the Northwestern Mill. In 1881, Simpson sent his manager, George Emerson, to Hoquiam to establish a mill there, and Emerson purchased 300 acres for the new mill and lumber operation. By September 1882, the Simpson mill was producing its first lumber products. 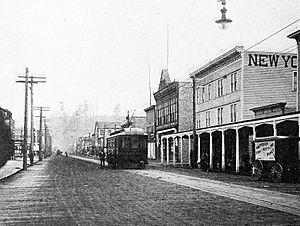 In 1886, Captain Simpson merged his mill with the Miller Brother’s mill, also located in Hoquiam, and named it the Northwest Lumber Company The mill was later renamed the Simpson Lumber Company, and retained that name until 1906. In 1913, Frank J. Shields became the new manager at the mill at Hoquiam.

In 1907, Hoquiam was home to Industrial Workers of the World Industrial Union No. 276.

Hoquiam experiences a Mediterranean climate (Köppen climate classification Csb) that borders closely on an oceanic climate. Outside of the mild and dry summer season, rainfall is generally very high and monthly totals of over 20 inches (510 mm) are not unknown. Snowfall is rare and indeed does not fall many years, however in the winter of 1964/1965 as much as 40.8 inches (1.0 m) of snow fell in two storms.

There were 3,480 households of which 32.3% had children under the age of 18 living with them, 37.5% were married couples living together, 16.5% had a female householder with no husband present, 6.8% had a male householder with no wife present, and 39.1% were non-families. 30.7% of all households were made up of individuals and 13.6% had someone living alone who was 65 years of age or older. The average household size was 2.48 and the average family size was 3.03.

There are 3,640 households of which 31.8% have children under the age of 18 living with them, 41.8% are married couples living together, 14.7% have a female head of house with no husband present, and 38.3% are non-families. 31.6% of all households are made up of individuals and 15.4% have someone living alone who is 65 years of age or older. The average household size is 2.47 persons and the average family size is 3.09 members. 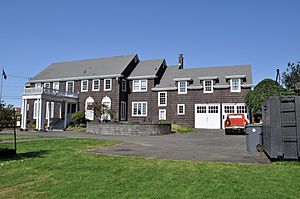 Hoquiam's Polson Museum occupies the F. Arnold Polson House and Alex Polson Grounds. The museum contains artifacts related to the history of Hoquiam and the region. 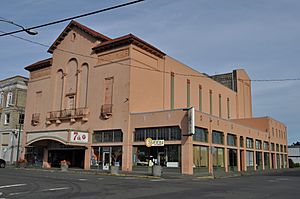 The 7th Street Theatre, listed on the National Register of Historic Places. 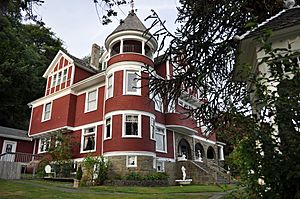 Hoquiam's Castle, listed on the National Register of Historic Places.

Hoquiam is the home of the Loggers' Playday, celebrated with a parade and logging competition every September, in which loggers from around the world come to participate.

Hoquiam sponsors the Shorebird Festival, the Logger's Playday, the Hoquiam's Riverfest, and the On Track Arts Festival.

All content from Kiddle encyclopedia articles (including the article images and facts) can be freely used under Attribution-ShareAlike license, unless stated otherwise. Cite this article:
Hoquiam, Washington Facts for Kids. Kiddle Encyclopedia.