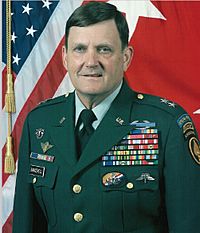 Major General Eldon A. Bargewell (August 13, 1947 – April 29, 2019) was an American army general. He was Commander of Delta Force from 1996 to 1998. Bargewell was born in Hoquiam, Washington. He served in the Vietnam War, Gulf War, Operation Just Cause, Operation Acid Gambit and in War in Afghanistan.

Bargewell was killed after his lawnmower crushed him on April 29, 2019 at his home in Eufaula, Alabama at the age of 71.

All content from Kiddle encyclopedia articles (including the article images and facts) can be freely used under Attribution-ShareAlike license, unless stated otherwise. Cite this article:
Eldon Bargewell Facts for Kids. Kiddle Encyclopedia.