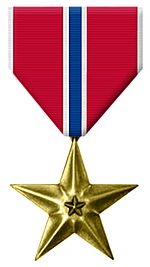 The Bronze Star Medal is the fourth-highest individual military award. It is the ninth-highest award by order of precedence in the US Military. It may be awarded for acts of heroism, acts of merit, or meritorious service in a combat zone. When it is awarded for acts of heroism, the medal is awarded with the "V" device attached. The required acts are less heroic than those that qualify for the Silver Star.

The medal is sometimes called the Bronze Star. Foreign soldiers, as well as officers from the other federal uniformed services are also eligible to receive the decoration. They must be serving with a service branch of the United States Armed Forces.

The Bronze Star Medal was an idea by Colonel Russell P. "Red" Reeder in 1943. He believed it would aid morale if there was a medal which could be awarded by captains of companies or batteries to deserving people serving under them. Reeder felt another medal was needed for ground forces that was equivalent to the Air Medal. He proposed that the new award be called the "Ground Medal". The idea eventually gained support. General George C. Marshall wrote a memorandum (note) to President Franklin D. Roosevelt dated 3 February 1944. He wrote:

The Air Medal had been adopted two years earlier to raise airmen's morale. President Roosevelt authorized the Bronze Star Medal by Executive Order 9419 dated 4 February 1944. The order was made retroactive to 7 December 1941. The Executive Order was amended by President John F. Kennedy. The Executive Order 11046 dated 24 August 1962 expanded the authorization to include those serving with friendly forces. This allowed for awards where US service members might be involved in an armed conflict where the United States was not a belligerent. At the time of the Executive Order the US was not a belligerent in Vietnam. So any US advisers serving with the Republic of Vietnam Armed Forces would not have been eligible for the award.

A study was conducted in 1947. The outcome was the policy was changed to make the retroactive award of the Bronze Star Medal (without the "V" device) to all soldiers who had received the Combat Infantryman Badge. It also included those who received the Combat Medical Badge during World War II. The reason for doing this was that the badges were awarded to soldiers who experienced the hardships described in General Marshall's memorandum. Both badges required a recommendation by the commander and a citation in orders.

All content from Kiddle encyclopedia articles (including the article images and facts) can be freely used under Attribution-ShareAlike license, unless stated otherwise. Cite this article:
Bronze Star Medal Facts for Kids. Kiddle Encyclopedia.