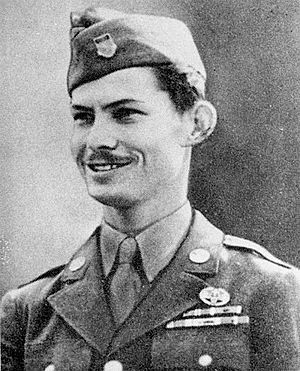 Doss about to receive the Medal of Honor in October 1945

Desmond Doss (February 7, 1919 – March 23, 2006) grew up in Lynchburg, Virginia and was a Seventh-day Adventist, which meant he was a pacifist. He did not believe in violence and chose not to use or carry weapons. He vowed not to kill.

He was a combat medic in the United States Army during World War II. During the Battle of Okinawa, he saved 75 soldiers that were left behind and wounded. He tied them in a special knot and lowered them safely down the ridge. After the war, Desmond Doss was awarded with many medals. He was the first pacifist to receive the Medal of Honor. He received the purple heart.

All content from Kiddle encyclopedia articles (including the article images and facts) can be freely used under Attribution-ShareAlike license, unless stated otherwise. Cite this article:
Desmond Doss Facts for Kids. Kiddle Encyclopedia.