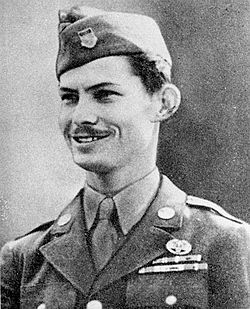 A conscientious objector (CO) is a person who decides not to be a combatant in military forces.

There are many reasons for this decision such as religious beliefs, ethical and moral beliefs to not kill human beings or pacifism.

Countries treat COs in various ways. They have also been treated differently throughout history. COs have been arrested or had to pay a fine. Some countries punished them by killing them. After World War II, many Western countries created alternative non-military services (civil service) as alternative form for pacifists. Often there were commissions to decide if someone really did not want to do armed service because of his beliefs or because of fear of war.

European Court of Human Rights has judged the denial of COs is violation of freedom of religion and thought in 2013, as well European Union recognized the right of conscientious objector as one of fundamental rights.

All content from Kiddle encyclopedia articles (including the article images and facts) can be freely used under Attribution-ShareAlike license, unless stated otherwise. Cite this article:
Conscientious objector Facts for Kids. Kiddle Encyclopedia.