Battle of Okinawa facts for kids

The Battle of Okinawa was a great battle of World War II. It took place on Okinawa Island in the Ryukyu Islands (south of the four big islands of Japan). The battle was between the military forces of the Empire of Japan and the Allies. It was the second biggest amphibious battle (from sea to land) of World War II, after the Battle of Normandy. It was also one of the longest battles in history, from April to June 1945. The Allies won the battle and occupied Okinawa. Today, Okinawa is Japanese territory, but there are still American military bases there.

The Battle of Okinawa is considered to be the last major battle of World War II. The Americans were planning Operation Downfall, the invasion of the four great islands of Japan. This never happened, since the Japanese surrendered after the American use of the atomic bomb in August 1945 (first in Hiroshima, and a second time in Nagasaki) and the Soviet Union declaring war on Japan.

The battle has been called "Typhoon of Steel" in English, and "tetsu no ame," "tetsu no bōfū" by the people of Okinawa, which mean "rain of steel" and "violent wind of steel", because of the very heavy firing of guns and bombs at this battle.

Some battles, such as the Battle of Iwo Jima, had no civilians present, but Okinawa had a large civilian population. The civilians killed or injured in the battle were at least 150,000. American deaths were 18,900 killed or missing and 53,000 injured, more than double of the soldiers killed at Iwo Jima and Guadalcanal put together. Several thousand soldiers who died from wounds and other causes after the battle had finished, are not included. About a third of the civilian population of the island were killed.

There were about 100,000 Japanese soldiers killed and 7,000 captured. Some of the soldiers committed seppuku or simply blew themselves up with grenades. Some of the civilians, convinced by Japanese propaganda that the Americans were barbarians who did terrible things to prisoners, killed their families and themselves to avoid capture.

In 1945, Winston Churchill called the battle "among the most intense and famous in military history."' 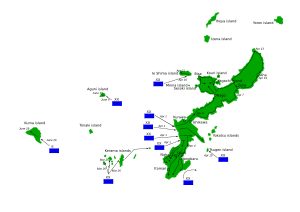 A map of U.S. operations at Okinawa. 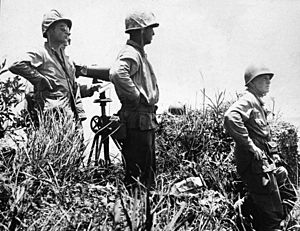 The last picture of General Simon Bolivar Buckner, Jr., right, the day before he was killed by Japanese artillery on 19 June 1945.

At the start of the Battle of Okinawa the 10th Army had 182,821 men under its command. The U.S. Navy had greater casualties in this operation than in any other battle of the war. 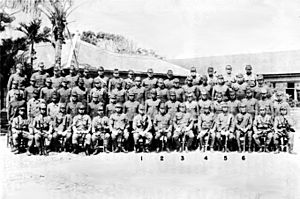 The Japanese land campaign (mainly defensive) was had 67,000 men (77,000 according to some sources). As well, there were 9,000 Imperial Japanese Navy (IJN) troops at Oroku naval base. There were also 39,000 local Ryukyuan people who were forced to fight. 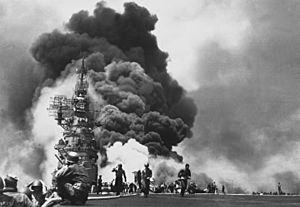 The United States Navy's Task Force 58 was east of Okinawa. It had 6 to 8 destroyers and 13 carriers. Admiral Chester W. Nimitz gave his naval commanders time to rest.

Japanese air attacks had been light during the first few days after the landings. However, on 6 April, there was an attack by 400 planes from Kyushu. From 26 March-30 April, 20 American ships were sunk and 157 damaged.

The Japanese had lost up to more than 1,100 planes in the battle. 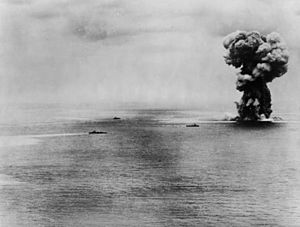 Operation Ten-Go (Ten-gō sakusen) was the attack by ten Japanese ships. In all, the Imperial Japanese Navy lost 3,700 sailors, including Admiral Itō. The US lost just 10 U.S. aircraft and 12 airmen.

The British Pacific Fleet was ordered to attack Japanese airfields in the Sakishima Islands. 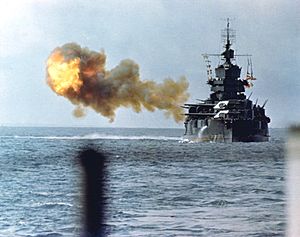 The land battle took place over about 81 days beginning on 1 April 1945. The first Americans ashore were soldiers of the 77th Infantry Division, who landed west of Okinawa on 26 March. 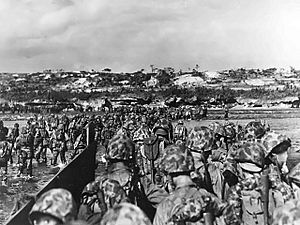 The main landing was made by XXIV Corps and III Amphibious Corps on the western coast of Okinawa on 1 April.

The 10th Army moved across the south-central part of the island. They captured the Kadena and the Yomitan airbases.

Six days later on 13 April, the 2nd Battalion, 22nd Marine Regiment reached Hedo Point (Hedo-misaki) at the northern part of the island. Japanese forces in the north were on the Motobu Peninsula.

The next American goal was Kakazu Ridge. The Japanese soldiers hid in caves. There were many casualties on both sides.

On the evening of 12 April, the 32nd Army attacked U.S. positions. The attackers retreated. A final attack on 14 April was again stopped.

The launched a new attack on 19 April with 324 guns, the largest ever in the Pacific Ocean war. Then 650 Navy and Marine planes attacked with napalm, rockets, bombs, and machine guns. 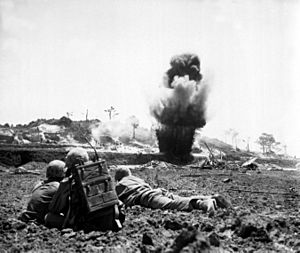 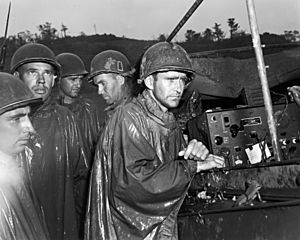 American soldiers of the 77th Division listen impassively to radio reports of Victory in Europe Day on May 8, 1945.

On 4 May, the 32nd Army launched another attack. This time, Ushijima tried to land troops on the coasts behind American lines. Japanese artillery fired 13,000 rounds. The attack failed.

Buckner launched another American attack on 11 May. By the end of May, monsoon rains turned hills and roads into mud. 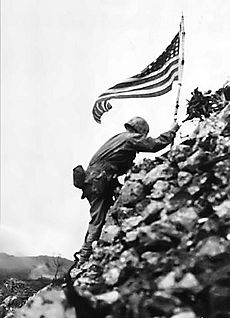 Lt. Col. Richard P. Ross, commander of 1st Battalion, 1st Marines braves sniper fire to place the division's colors on Shuri Castle on 30 May. This flag was first raised over Cape Gloucester and then Peleliu.

The Japanese retreat moved nearly 30,000 men into its last defense line on the Kiyan Peninsula. The 4,000 Japanese sailors — including Admiral Minoru Ota — all committed suicide.

On 18 June, Gen. Buckner was killed by enemy artillery fire. The last Japanese stopped fighting on 21 June, although some Japanese stayed hidden.

All content from Kiddle encyclopedia articles (including the article images and facts) can be freely used under Attribution-ShareAlike license, unless stated otherwise. Cite this article:
Battle of Okinawa Facts for Kids. Kiddle Encyclopedia.