Iwo Jima meaning "sulfur island" is a volcanic island in Japan, part of the Volcano Islands (also known as the Ogasawara Islands), approximately 650 nautical miles (1200 km) south of Tokyo (24.78°N, 141.32°E). It has an approximate area of 8 square miles (21 km2). The most prominent feature of the island is Mount Suribachi, a volcano which is thought to be dormant, and is 546 feet (166 m) in height. Iwo Jima is unusually flat and featureless for a volcanic island. Suribachi is the only obviously volcanic feature, although Iwo Jima is almost entirely volcanic in origin.

The island was uninhabited until the 1800's. Japan colonized it, and by 1943, a settlement of almost 1,100 Japanese civilians existed on the island. Most of these were either employed at a sugar mill located in the northeastern portion of the island, or at a sulphur mine and refinery located in the same general area. The inhabitants of Iwo Jima lived in five settlements, scattered over the northern half of the island.

The island was the site of the Battle of Iwo Jima in World War II 1945 , and as a result, remained occupied by the United States until 1968. It was on Mount Suribachi that one of the more famous World War II photographs was taken on February 23, 1945 by Joe Rosenthal. 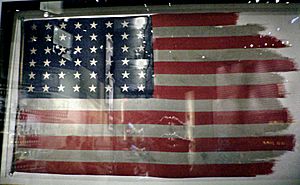 The American flag pictured in 'Raising the Flag on Iwo Jima' by Joe Rosenthal. Damage to the flag is from high winds at the peak of Mount Suribachi

Major industries have included sulfur mining and sugar refining, but the island is presently uninhabited, and access requires special permission. The island is administered by the Tokyo Metropolitan Government.

Iwo Jima is not, and never was, a very beautiful island. The island smells of sulfur, and there is very little vegetation. (Additionally, there is still live ordnance on various parts of the island.) The only habitation on the island is a Japanese naval base. 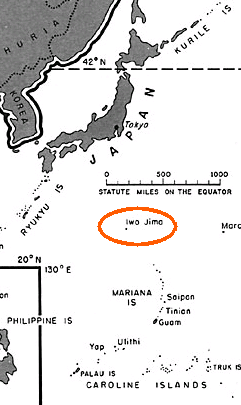 Only the northern part of Iwo Jima has soil permitting some gardening. Vegetables, sugar cane, and dry grains have been raised for local consumption. One of the most serious impediments to large-scale settlement of the island is the total absence of any source of fresh water, such as a lake or a river. Since the island also lacks wells, water has to be obtained from rain carefully collected in concrete cisterns.

While the northern part of the island is barren but habitable, the southern half of Iwo Jima is essentially uninhabitable. Near the narrow southern tip of the island stands Mount Suribachi. Mount Suribachi is a dormant volcanic cone, which rises to an elevation of about 550 feet (168 m) above sea level.

Iwo Jima is volcanic in origin and in fact is a mostly undersea caldera formed from violent eruptions sometimes in the ancient past. It is the presence of a magma chamber not far beneath the surface that is responsible for the hot ground and sulfur smell (hydrogen sulfide and sulfur are both very common products of volcanic and geothermal activity).

There have been a number of historic volcanic eruptions, mostly small phreatic (steam-generated) eruptions and some of them were submarine eruptions. The most recent eruption was in 2001. The cone of Suribachi, however, has not been historically active.

Iwo Jima has undergone dramatic uplift over the last 700 years, likely because of an expanding magma chamber underneath. A shoreline surveyed by Captain James Cook in 1779 is now over 131 feet (40 metres) above sea level.

The desolation of the island is further accentuated by the sparse vegetation and absence of native animals. In 1944, the only resident vertebrates on Iwo were in fact Japanese forces and whatever rats were accidentally introduced with supplies; the single endemic bird, a subspecies of the White-browed Crake, had gone extinct in the 1920s following the extension of the mining operations.

All content from Kiddle encyclopedia articles (including the article images and facts) can be freely used under Attribution-ShareAlike license, unless stated otherwise. Cite this article:
Iwo Jima Facts for Kids. Kiddle Encyclopedia.