The Second Battle of Guam (July 21 — August 10, 1944) was the capture of Guam by the United States from Japanese control. Guam was a U.S. territory (in the Mariana Islands). The battle was during the Pacific campaign of World War II.

It was captured by the Japanese on December 10, 1941. This was after the Attack on Pearl Harbor. It was not as fortified as the other Mariana Islands, such as Saipan.

The Allied plan for the invasion of the Marianas was for heavy bombing by planes and then bombing by battleships.

Guam was chosen as a target because it was big enough to be a base for the next attacks on the Philippines, Taiwan and the Ryukyu Islands. The harbor at Apra could take the largest ships. The two airfields were big enough for B-29 Superfortress bombers.

A large Japanese carrier attack and heavy fighting in Saipan led to the invasion of Guam being delayed for a month. 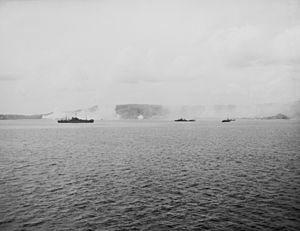 Bombardment of Guam on 14 July 1944 before the battle, as seen from USS New Mexico 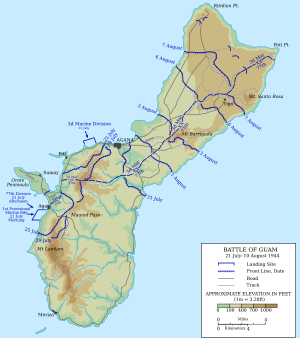 Map showing the progress of the Guam campaign.

Guam is surrounded by reefs, cliffs, and heavy waves. This makes Guam hard to attack.

On July 21, the Americans landed on both sides on the western side of Guam. The 3rd Marine Division landed at 08:28. The 1st Provisional Marine Brigade landed to the south. Japanese artillery sank 20 Landing Ships. The Americans had many dead and wounded.

By 09:00 men and tanks were on both beaches. The 77th Infantry Division had to walk through the shallow water. Japanese guns fired at them.

By nightfall the Americans controlled the beachs about 2,000 meters deep. Japanese attacks were made throughout the first few days.

Supply was very difficult for the Americans in the first days of the battle.

The attacks against the American beaches, as well as the violent fighting, had tired out the Japanese. At the start of August they were running out of food and ammunition and had only a few tanks left.

Obata moved to the mountainous central and northern part of the island. He could not get any more supplies or get new troops because of American control of the sea and air around Guam.

The Japanese refused to surrender, and almost all were killed. On August 10, the US captured Guam. The next day, Obata committed ritual suicide.

A few Japanese soldiers hid in the jungle. On December 8, 1945, three U.S. Marines were killed. On January 24, 1972, Sergeant Shoichi Yokoi was discovered by hunters. He had lived alone in a cave for 27 years.

After the battle, Guam was turned into a base for Allied operations. Five large airfields were built by the Seabees. B-29 bombers flew from the island to attack targets in the Western Pacific and on mainland Japan.

Liberation Day continues to be celebrated on Guam every July 21.

All content from Kiddle encyclopedia articles (including the article images and facts) can be freely used under Attribution-ShareAlike license, unless stated otherwise. Cite this article:
Battle of Guam (1944) Facts for Kids. Kiddle Encyclopedia.