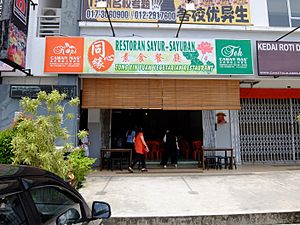 There are many reasons for not eating meat. Vegetarians are healthier than other people in some ways. Some people think that it is wrong to kill animals; others think that eating meat is bad for their health or the world. This is because land used for animals can be used to grow food. Some people may become vegetarians because their religion says not to eat animals.

Some people who call themselves vegetarians and eat fish or sea food are not vegetarians, because fish and sea creatures are also animals. Such people are sometimes called pescetarians. There are also many people who are not vegetarians, but do not eat too much animal food. Some eat only very little meat (so-called "flexitarians" or "semi-vegetarians"), some eat only fowl ("pollotarians"). There is also a philosophy called freeganism, it means eating animal products only if otherwise they will be thrown away to garbage - such as food thrown away by restaurants.

There are several reasons why people choose to be vegetarians. It has many proven benefits on human health. Some think it is wrong or cruel to eat animals, since animals are killed and often feel pain. Other people may feel disgusted by meat or do not like the taste. A fourth reason is the effect on the environment. Producing meat (especially beef) uses more of the earth's land and water than eating food from plants. People may have more than one different reason for being a vegetarian.

A vegetarian diet or a diet very low in meat has proven good effects on human health. It takes work to put together a healthy vegetarian diet that has everything the human body needs. When people decide to become vegetarian, they usually think carefully about what they eat and choose healthy food. They also go to the trouble of finding fresh food more often. Vegetarians eat lots of antioxidants and natural fiber. Scientists say vegetarians are less likely to have heart disease, some kinds of cancer, obesity and diabetes. 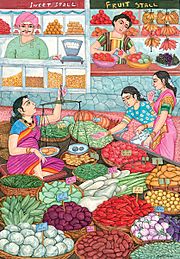 A market in India sells tasty ingredients for a vegetarian diet.

Most vegetarians in the world are Hindu. Hinduism and Jainism in general teach vegetarianism, while Buddhism may or may not. Without any specific religion, some people in the Western world also follow a vegetarian diet because it may deepen inner spiritual connections (for example, James Redfield). Mahatma Gandhi said that spiritual experiences are greatly enhanced on a vegetarian diet.

Hindus teach vegetarianism as a way to live with a minimum of hurt to other beings. In today’s world, about twenty percent of all Hindus are vegetarians. There are approximately 200 million vegetarians in India, which has more people that do not eat meat than any other country. More vegetarians live in the South of India than in the North, possibly because the North is colder. For yoga and meditation, it is wise to be vegetarian.

The Hindu who believes in non-injury or nonviolence (ahimsa) naturally adopts a vegetarian diet. It is a matter of conscience more than anything else. The Vedic and Puranic scriptures of Hinduism explain that animals have souls and the act of killing animals brings bad karma because the killer will suffer the pain of the animal he has killed in this life or the next. Satguru Sivaya Subramuniyaswami adds that when we eat meat, fish, fowl and eggs, we absorb the vibration of the creatures into our nerves. This promotes fear, anger, jealousy, confusion, resentment and the like. The Manu Dharma Shastras state, “When the diet is pure, the mind and heart are pure.” Generally there is the belief, based on scriptures such as Bhagavad Gita, that one's food shapes the personality, mood and mind.

All content from Kiddle encyclopedia articles (including the article images and facts) can be freely used under Attribution-ShareAlike license, unless stated otherwise. Cite this article:
Vegetarianism Facts for Kids. Kiddle Encyclopedia.