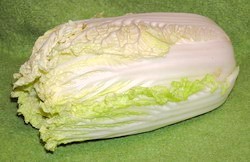 These vegetables are both variant cultivars or subspecies of the turnip and belong to the same genus as such Western staples as cabbage, broccoli, and cauliflower. Both have many variations in name, spelling, and scientific classification, especially bok choy cultivars.

The Chinese cabbage was principally grown in the Yangtze River Delta region, but the Ming Dynasty naturalist Li Shizhen popularized it by bringing attention to its medicinal qualities. The variant cultivated in Zhejiang around the 14th century was brought north and the northern harvest of napa cabbage soon exceeded the southern one. These were then exported back south along the Grand Canal to Hangzhou and traded by sea as far south as Guangdong.

Napa cabbage became a staple in Northeastern Chinese cuisine for making suan cai, Chinese sauerkraut. In Korea, this developed into kimchi. Chinese cabbage is now commonly found in markets throughout the world, catering both to the Chinese diaspora and to northern markets who appreciate its resistance to cold.

In 2017, aboard the International Space Station a crop of Chinese cabbage from a plant growth device included an allotment for crew consumption, while the rest was saved for scientific study.

There are two distinctly different groups of Brassica rapa used as leaf vegetables in China, and a wide range of cultivars within these two groups. The binomial name B. campestris is also used.

This group is the more common of the two, especially outside Asia; names such as napa cabbage, dà báicài (Chinese: 大白菜, "large white vegetable"); Baguio petsay or petsay wombok (Tagalog); Chinese white cabbage; "wong a pak" (Hokkien, Fujianese); baechu (Hangul: 배추), wongbok and hakusai (Japanese: or ) usually refer to members of this group. Pekinensis Group cabbages have broad green leaves with white petioles, tightly wrapped in a cylindrical formation and usually forming a compact head. As the group name indicates, this is particularly popular in northern China around Beijing (Peking). 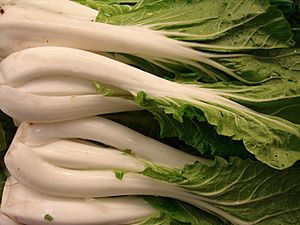 Chinensis Group cultivars do not form heads; instead, they have smooth, dark green leaf blades forming a cluster reminiscent of mustard or celery. These cultivars are popular in southern China and Southeast Asia. Being winter-hardy, they are increasingly grown in Northern Europe. This group was originally classified as its own species under the name B. chinensis by Linnaeus.

All content from Kiddle encyclopedia articles (including the article images and facts) can be freely used under Attribution-ShareAlike license, unless stated otherwise. Cite this article:
Chinese cabbage Facts for Kids. Kiddle Encyclopedia.