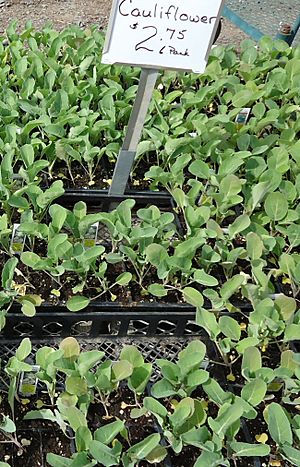 Cauliflower plants growing in a nursery in New Jersey.

Cauliflower is one of several vegetables in the species Brassica oleracea, in the family Brassicaceae. It is an annual plant that reproduces by seed. Typically, only the head (the white curd) is eaten. The cauliflower head is composed of a white inflorescence meristem. Cauliflower heads resemble those in broccoli, which differs in having flower buds.

Its name is from Latin caulis (cabbage) and flower,. Brassica oleracea also includes broccoli, brussels sprouts, cabbage, collard greens, and kale, though they are of different cultivar groups.

For such a highly modified plant, cauliflower has a long history. François Pierre La Varenne employed chouxfleurs in Le cuisinier françois. They were introduced to France from Genoa in the 16th century, and are featured in Olivier de Serres' Théâtre de l'agriculture (1600), as cauli-fiori "as the Italians call it, which are still rather rare in France; they hold an honorable place in the garden because of their delicacy", but they did not commonly appear on grand tables until the time of Louis XIV.

There are four major groups of cauliflower.

There are hundreds of historic and current commercial varieties used around the world. A comprehensive list of about 80 North American varieties is maintained at North Carolina State University.

In Great Britain and southern Italy, a broccoli with tiny flower buds is sold as a vegetable under the name "purple cauliflower"; it is not the same as standard cauliflower with a purple curd.

Cauliflower is low in fat, low in carbohydrates but high in dietary fiber, folate, water, and vitamin C, possessing a high nutritional density.

Cauliflower contains several phytochemicals, common in the cabbage family, that may be beneficial to human health.

Boiling reduces the levels of these compounds, with losses of 20–30% after five minutes, 40–50% after ten minutes, and 75% after thirty minutes. However, other preparation methods, such as steaming, microwaving, and stir frying, have no significant effect on the compounds. 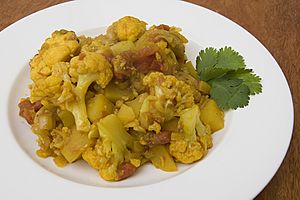 Cauliflower can be roasted, boiled, fried, steamed, or eaten raw. When cooking, the outer leaves and thick stalks are removed, leaving only the florets. The leaves are also edible, but are most often discarded. The florets should be broken into similar-sized pieces so they are cooked evenly. After eight minutes of steaming, or five minutes of boiling, the florets should be soft, but not mushy (depending on size). Stirring while cooking can break the florets into smaller, uneven pieces.

Low carbohydrate dieters can use cauliflower as a reasonable substitute for potatoes or rice; while they can produce a similar texture, or mouth feel, they lack the starch of the originals. 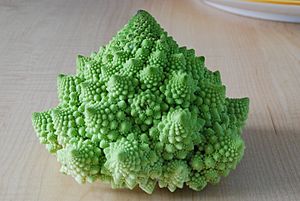 Fractal pattern of Romanesco broccoli, a variant form of cauliflower

Cauliflower has been noticed by mathematicians for its distinct fractal dimension, predicted to be about 2.8.

The oldest record of cauliflower dates back to the 6th century B.C. Pliny wrote about it in the 2nd century. In the 12th century, three varieties were described in Spain as introductions from Syria, where it had doubtless been grown for more than a thousand years. It is found in the writings of the Arab botanists Ibn al-'Awwam and Ibn al-Baitar, in the 12th and 13th centuries when its origins were said to be Cyprus.

All content from Kiddle encyclopedia articles (including the article images and facts) can be freely used under Attribution-ShareAlike license, unless stated otherwise. Cite this article:
Cauliflower Facts for Kids. Kiddle Encyclopedia.