Vitamin B12 facts for kids 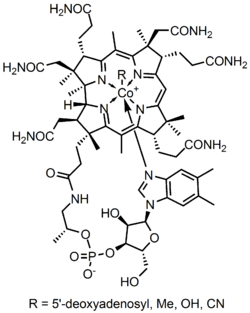 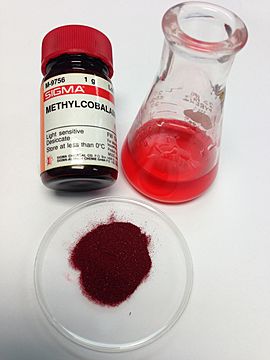 Methylcobalamin (shown) is a form of vitamin B12. The dark red crystals form cherry-colored transparent solutions in water

Vitamin B12 (or vitamin B-12) is also called cobalamin. It has a key role in the normal functioning of the brain and nervous system, and for the formation of blood. It is one of the eight B vitamins.

B12 is normally involved in the metabolism of every cell of the human body, especially DNA synthesis and regulation, but also fatty acid and amino acid metabolism. Fungi, plants and animals (including humans) cannot produce vitamin B12. Only bacteria and archaea have enzymes for its synthesis, although animals can convert it to the version they need.

Many foods are a natural source of B12 because of bacterial symbiosis. It is produced by some of the gut flora of herbivores. Carnivores, of course, eat herbivores. Also algae and plants get it from symbiosis. So, by one route or another, animals must get vitamin B12 from bacteria (and archaea).

The vitamin is the largest and most structurally complicated vitamin. It can be produced industrially only by bacterial fermentation-synthesis.

Vitamin B12 is a group of chemically related compounds, all of which have vitamin activity. It contains the biochemically rare element cobalt sitting in the center of a ring called a corrin ring. In the human body it is converted to the human physiological forms.

All content from Kiddle encyclopedia articles (including the article images and facts) can be freely used under Attribution-ShareAlike license, unless stated otherwise. Cite this article:
Vitamin B12 Facts for Kids. Kiddle Encyclopedia.