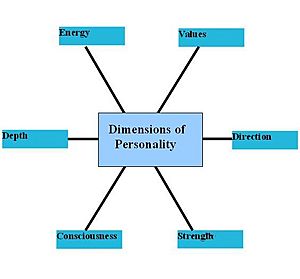 A picture of the depictions of personality dimensions.

Personality is a term that describes traits a person shows consistently at different times and in different situations. If we understand a person's personality we may be able to predict their behavior in many situations. Predictability makes it possible to explain and understand behavior. A person's personality can often suggest their internal thoughts, feelings, and behaviors. Intrapersonal functioning is a term used to describe the stable processes that underlie these thoughts, feelings, and behaviors. Gordon Allport defined personality as a "dynamic organization inside a person, of psychophysical systems that create the person's characteristic patterns of behavior, thoughts and feelings."

If any of the four humors were at abnormal levels, Hippocrates believed the person would display the temperaments or show signs of sickness.

Trait theory suggests that there are both traits and types within people that create the personality. Types are discontinuous categories that have qualitative differences. Traits are stable qualities in people that have continuous dimensions and quantitative differences. Examples of traits are things like fairness, intelligence, confidence, and helpfulness. Individual differences are reflected in the amount that a trait is seen. Within trait theory, there are many different approaches to how traits operate and to what extent. A Nomothetic view of traits suggests that traits are universal and it is possible to compare traits among individuals. It also states that individuals reflect a unique combination of traits, implying that while everyone has the same basic traits, not all individuals have the same levels of each trait. An Ideographic view of traits suggests that traits are idiosyncratic, or not universal. This approach explains that comparisons are not possible among individuals because not all traits are shared. It states that traits may be different in importance for different groups of people.

Motives are another important factor to consider when studying the personality. Motives are forces that are influenced by an underlying need. A need is a manifestation of an internal biological or psychological state. Needs direct behavior and influence a person's state of being. When a need is not met, an individual will have a motive to fulfill that need. For example, every human being has a need for water. The motive would be thirst. The need for water influenced the motive to no longer be thirsty. A press is an external event that acts as a trigger for motives. Using the same example as before, a thirsty person may be triggered to drink water by seeing a cold cup of water, which serves as a press.

Another theory about personality is the inheritance or evolutionary theories. These theories suggest that personality is genetically-based. Evolutionists believe that the personality has adapted over time to ensure survival and reproduction.

Social learning theory suggests that the personality is shaped by our experiences with relationships, our environment, and the social world in general.

Through experimentation and research, psychologists have been able to identify five major personality traits. These are known as the 'Big Five':

Neuroticism refers to a person's emotionality. Someone high in neuroticism has low emotional control and lability. This may cause them to exhibit signs of nervousness, anxiety, and excitability. A neurotic person may also display hostility, depression, self-consciousness, impulsiveness, and vulnerability to stress.

Extroversion is also known as sociability. This means their social adaptability, assertiveness, and energy level. A person high in extraversion would be extremely warm, positive, and prone to excitement-seeking.

Openness is also known as the intellect factor. Openness is associated with culture and being open to ideas and experiences. A person high in openness would be labeled creative, knowledgeable, and imaginative.

Agreeableness is associated with conformity, friendliness, and likability. A person high in agreeableness would be considered friendly, kind, considerate, and good-natured.

Conscientiousness is also known as responsibility and having a strong will to achieve. A person high in conscientiousness would be considered cautious, planful, serious, and hardworking

All content from Kiddle encyclopedia articles (including the article images and facts) can be freely used under Attribution-ShareAlike license, unless stated otherwise. Cite this article:
Personality psychology Facts for Kids. Kiddle Encyclopedia.