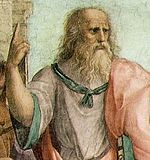 Greek philosophers like Plato rejected the concept of creativity, preferring to see art as a form of discovery

Creativity is a phenomenon whereby something new is formed. The created item may be intangible (such as an idea, a scientific theory, a musical composition, or a joke) or a physical object (such as an invention, a literary work, or a painting).

In everyday thought, people often spontaneously imagine alternatives to reality when they think "if only...". Their counterfactual thinking is viewed as an example of everyday creative processes.

All content from Kiddle encyclopedia articles (including the article images and facts) can be freely used under Attribution-ShareAlike license, unless stated otherwise. Cite this article:
Creativity Facts for Kids. Kiddle Encyclopedia.