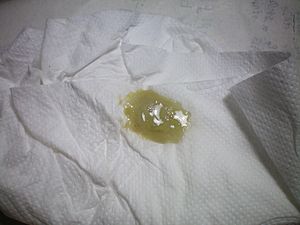 Phlegm is a liquid secreted by the mucous membranes of mammals.

Its definition is limited to the mucus produced by the respiratory system, excluding that from the nasal passages, and particularly that which is expelled by coughing (sputum).

Phlegm is in essence a water-based gel consisting of glycoproteins, immunoglobulins, lipids and other substances. Its composition varies depending on climate, genetics, and state of the immune system.

Its color can vary from transparent to pale or dark yellow and green, from light to dark brown, and even to dark grey depending on the constituents. The body naturally produces a quart of phlegm every day to capture and clear substances in the air and bacteria from the nose and throat.

Distinction between mucus and phlegm

Contrary to popular misconception and misuse, mucus and phlegm are not always the same.

Mucus is a normal protective layering around the airway, eye, nasal turbinate, and urogenital tract. Mucus is an adhesive viscoelastic gel produced in the airway by submucosal glands and goblet cells and is principally water. It also contains high-molecular weight mucous glycoproteins that form linear polymers.

Phlegm is more related to disease than is mucus and can be troublesome for the individual to excrete from the body. Phlegm is a juicy secretion in the airway during disease and inflammation. Phlegm usually contains mucus with virus, bacteria, other debris, and sloughed-off inflammatory cells. Once phlegm has been expectorated by a cough, it becomes sputum.

All content from Kiddle encyclopedia articles (including the article images and facts) can be freely used under Attribution-ShareAlike license, unless stated otherwise. Cite this article:
Phlegm Facts for Kids. Kiddle Encyclopedia.