For the biochemical process, see respiration

The respiratory system, also called the gas exchange system, is the body getting rid of carbon dioxide and taking in oxygen. Carbon dioxide, a waste product, goes out of the body. Oxygen, which the body needs, comes in. 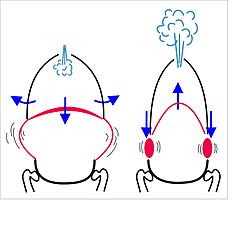 A cartoon illustrating the mechanisms for forceful inhalation (left), and forceful exhalation (right). During forceful inhalation the diaphragm (the domed, almost horizontal structure in red, between the thoracic cavity (upper compartment) and abdominal cavity (lower compartment), contracts forcing the abdominal contents downwards, causing the abdomen to bulge outwards. At the same time the accessory muscles of inhalation cause the transverse diameter of the thorax to increase as described in the illustration of the movement of the ribs on the left. During forced exhalation the powerful muscles of the abdominal wall pull the lower edges of the rib cage downwards decreasing the antero-posterior and transverse diameters of the chest cavity, while at the same time forcing the abdominal organs up against the diaphragm causing it to bulge deeply into the chest.The force with which air can be expelled from the lungs is considerable greater than the force with which air can be inhaled. This is the result of the power of the muscles of the abdominal wall exceeding that of all the accessory muscles of inhalation. The most vigorous exhalatory efforts occur during coughing, sneezing and the blowing out of, for instance, candles.

For respiration to happen, the body needs a constant supply of oxygen, which is done by breathing. Inhalation is the breathing in of air. To inhale, the lungs expand, decreasing the air pressure in the lungs. This is caused by the diaphragm (a sheet of muscular tissue that separates the lungs from the abdomen) and the muscles between the ribs contracting to expand the chest, which also expands the lungs. As the air pressure inside the lungs are lower when it has expanded, air from outside at higher pressure comes rushing into the area of low pressure in the lungs. Air first passes through the nose and mouth, then through the larynx (voice box), then down the trachea (windpipe), and into the lungs and comes out

The lungs are made of many tubes or branches. As air enters the lungs, it first goes through branches called the bronchi, then through smaller branches called bronchioles, and finally into the air sacs. Gas exchange occurs in the air sacs where oxygen is exchanged with carbon dioxide. The carbon dioxide in the air sacs now need to be exhaled, or breathed out. In the reverse process to inhaling, the diaphragm and the rib muscles relax, causing the lungs to be smaller. As the air pressure in the lungs is greater when the lungs are smaller, air is forced out. The exhaled air has a high concentration of carbon dioxide and a low concentration of oxygen. The maximum volume of air that can be inhaled and exhaled is called the vital capacity of the lungs and is up to five liters. 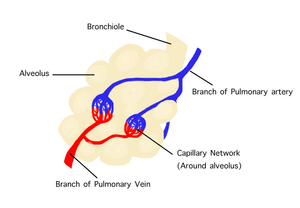 Structure of the air sac

All content from Kiddle encyclopedia articles (including the article images and facts) can be freely used under Attribution-ShareAlike license, unless stated otherwise. Cite this article:
Respiratory system Facts for Kids. Kiddle Encyclopedia.