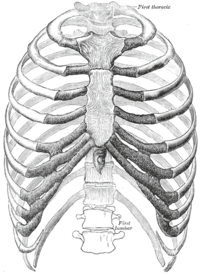 Human ribs (shown in red). It consists of 24 ribs. Left and right of first rib to twelfth rib.

In vertebrate anatomy, ribs (Latin: costae) are the long curved bones which form the rib cage, part of the axial skeleton. In most tetrapods, ribs surround the chest, enabling the lungs to expand and thus facilitate breathing by expanding the chest cavity. They serve to protect the lungs, heart, and other internal organs of the thorax. In some animals, especially snakes, ribs may provide support and protection for the entire body.

Ribs are classed as flat bones which usually have a protective role in the body. Humans have 24 ribs, in 12 pairs. All are attached at the back to the thoracic vertebrae, and are numbered from 1–12 according to the vertebrae they attach to. The first rib is attached to thoracic vertebra 1 (T1). At the front of the body most of the ribs are joined by costal cartilages to the sternum. The ribs connect to the vertebrae with two joints, the costovertebral joints.

The parts of a rib include the head, neck, body (or shaft), tubercle, and angle.

The head of the rib lies next to a vertebra. The ribs connect to the vertebrae with two costovertebral joints, one on the head and one on the neck. The head of the rib has a superior and an inferior articulating region, separated by a crest. These articulate with the superior and inferior costal facets on the connecting vertebrae. The crest gives attachment to the intra-articulate ligament that joins the rib to the vertebra of the same number, at the intervertebral disc. Another ligament, the radiate ligament joins the head of the rib to the both the body of the upper vertebra and to the body of the lower vertebra. The smaller middle part of the ligament connects to the intervertebral disc. This plane joint is known as the articulation of the head of the rib.

The neck of the rib is a flattened part that extends laterally from the head. The neck is about 3 cm long. Its anterior surface is flat and smooth, whilst its posterior is perforated by numerous foramina and its surface rough, to give attachment to the ligament of the neck. Its upper border presents a rough crest (crista colli costae) for the attachment of the anterior costotransverse ligament; its lower border is rounded.

A tubercle of rib on the posterior surface of the neck of the rib, has two facets (surfaces) one articulating and one non-articulating. The articular facet, is small and oval and is the lower and more medial of the two, and connects to the transverse costal facet on the thoracic vertebra of the same rib number. The transverse costal facet is on the end of the transverse process of the lower of the two vertebrae to which the head is connected. The non-articular portion is a rough elevation and affords attachment to the ligament of the tubercle. The tubercle is much more prominent in the upper ribs than in the lower ribs.

The first seven sets of ribs, known as "true ribs", are attached to the sternum by the costal cartilages. The first rib is unique and easier to distinguish than other ribs. It is a short, flat, C-shaped bone. The vertebral attachment can be found just below the neck at the first thoracic vertebra, and the majority of this bone can be found above the level of the clavicle. Ribs 2 through 7 have a more traditional appearance and become longer and less curved as they progress downwards. The following five sets are known as "false ribs", three of these sharing a common cartilaginous connection to the sternum, while the last two (eleventh and twelfth ribs) are termed floating ribs. They are attached to the vertebrae only, and not to the sternum or cartilage coming off of the sternum. 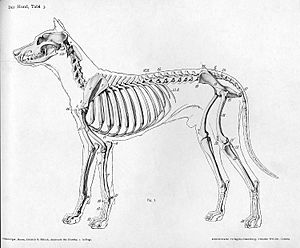 Skeleton of a dog showing the location of the ribs 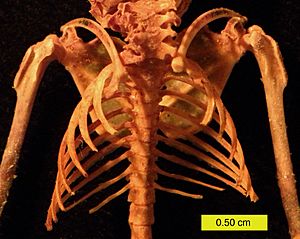 Tetrapods, however, only ever have a single set of ribs which are probably homologous with the dorsal ribs of fishes. In the early tetrapods, every vertebra bore a pair of ribs, although those on the thoracic vertebrae are typically the longest. The sacral ribs were stout and short, since they formed part of the pelvis, connecting the backbone to the hip bones.

In most subsequent forms, many of these early ribs have been lost, and in living amphibians and reptiles, there is great variation in rib structure and number. For example, turtles have only eight pairs of ribs, which are developed into a bony or cartilaginous carapace and plastron, while snakes have numerous ribs running along the full length of their trunk. Frogs typically have no ribs, aside from a sacral pair, which form part of the pelvis.

In birds, ribs are present as distinct bones only on the thoracic region, although small fused ribs are present on the cervical vertebrae. The thoracic ribs of birds possess a wide projection to the rear; this uncinate process is an attachment for the shoulder muscles. Usually dogs have 26 ribs. Mammals usually also only have distinct ribs on the thoracic vertebra, although fixed cervical ribs are also present in monotremes. In marsupials and placental mammals, the cervical and lumbar ribs are found only as tiny remnants fused to the vertebrae, where they are referred to as transverse processes. In general, the structure and number of the true ribs in humans is similar to that in other mammals. Unlike reptiles, caudal ribs are never found in mammals.

Ribs as food are widely used from many animals. The ribs are the less meaty part of the meat chop and they are often cooked as part of a slab; five or more is known as a rack, as in a rack of lamb. Short ribs are ribs of beef either served singly or several as a plate. A rib steak from beef is a popular choice used in many cuisines. Pork ribs, including spare ribs are popular in European and Asian cuisine.

All content from Kiddle encyclopedia articles (including the article images and facts) can be freely used under Attribution-ShareAlike license, unless stated otherwise. Cite this article:
Rib Facts for Kids. Kiddle Encyclopedia.