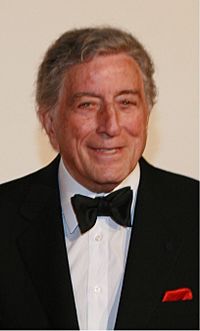 Tony Bennett (born Anthony Dominick Benedetto, August 3, 1926) is an American singer who is best known for his song I Left My Heart in San Francisco. He was born at St John’s Hospital in Long Island, New York. He has been married three times and has four children. He has many awards including a Grammy Award. Bennett is a Democrat and attended the 2012 Democratic National Convention in support of President Obama's re-election. In 2014 an album Bennett made with Lady Gaga was released. He continues to perform at a remarkable level of proficiency at almost 93 years old; an American icon!!

All content from Kiddle encyclopedia articles (including the article images and facts) can be freely used under Attribution-ShareAlike license, unless stated otherwise. Cite this article:
Tony Bennett Facts for Kids. Kiddle Encyclopedia.