Christina María Aguilera (born December 18, 1980) is an American singer, songwriter, actress and television personality. Born in Staten Island, New York and raised in Rochester and Wexford, Pennsylvania, she appeared on the television series Star Search and The Mickey Mouse Club in her early years. After recording "Reflection", the theme for Disney's 1998 film Mulan, Aguilera signed with RCA Records. She rose to prominence with her 1999 self-titled debut album that spawned the Billboard Hot 100 number-one singles "Genie in a Bottle", "What a Girl Wants", and "Come On Over Baby (All I Want Is You)". The following year, Aguilera released two studio albums; the Spanish-language album Mi Reflejo and the holiday album My Kind of Christmas. She assumed creative control for her fourth studio album, Stripped (2002), which produced "Dirrty", "Beautiful", and "Fighter". Aguilera's fifth studio album, Back to Basics (2006), debuted at number one on the album charts of ten countries and spawned the tracks "Ain't No Other Man" and "Hurt". In 2010, Aguilera released her sixth studio album Bionic and starred in the film Burlesque. The following year, she debuted as a coach on the reality competition television series The Voice; she has since appeared on six of its twelve seasons. Her seventh studio album, Lotus, was released in 2012. Aguilera has also been featured on several successful collaborations during her career, including "Lady Marmalade", "Moves like Jagger", and "Say Something".

Aguilera has been recognized as a pop icon and earned the title "Pop Princess" in her early years. Her work has earned her five Grammy Awards, one Latin Grammy Award, and a star on the Hollywood Walk of Fame. She has sold over 17.9 million albums in the United States as of 2014 and 50 million albums worldwide as of 2015. In 2009, she ranked at number 58 on Rolling Stone's list of 100 Greatest Singers of All Time, thereby becoming the youngest and the only artist under 30 to be named. Billboard recognized her as the 20th most successful artist of the 2000s, and Time listed Aguilera among the top 100 Most Influential People in the World of 2013. Aside from her work in the entertainment industry, Aguilera is involved in charitable activities through human rights, world issues, and her work as a UN ambassador for the World Food Programme.

Christina María Aguilera was born in Staten Island, New York, in December 18, 1980. Her parents Fausto Xavier Aguilera, was a soldier in the United States Army and Shelly Loraine (née Fidler), was a violinist and pianist, respectively. Her father has Ecuadorian ancestry. Her American mother has German, English, Irish, Scots-Irish, and French ancestry. Throughout her father's service in the Army, her family moved to various locations, including New Jersey, Texas, New York, and Japan. Her parents divorced when Aguilera was six years old. She, her mother, and her younger sister Rachel then lived at her grandmother's home in Rochester, Pennsylvania, a town outside Pittsburgh. Her mother later remarried.

Growing up, Aguilera, known locally as "the little girl with the big voice", aspired to be a singer, singing in local talent shows and competitions. She won her first talent show at the age of 8, in which she performed Whitney Houston's "I Wanna Dance with Somebody (Who Loves Me)". In 1990, she appeared on Star Search singing "A Sunday Kind of Love", and was eliminated during the semi-final rounds. She later performed the same song during an appearance on Pittsburgh's KDKA-TV's Wake Up with Larry Richert. Throughout her youth in Pittsburgh, Aguilera sang "The Star-Spangled Banner" before Pittsburgh Penguins hockey, Pittsburgh Steelers football, and Pittsburgh Pirates baseball games, in addition to the 1992 Stanley Cup Finals. She attended Rochester Area School District in Rochester and Marshall Middle School near Wexford, and briefly attended North Allegheny Intermediate High School before being home schooled due to bullying.

Aguilera has sold 17.9 million records in the United States, and 50 million records worldwide. Gregory Hicks from The Michigan Daily opined that "Aguilera deserves to be known as one of the greatest artists to ever hit the pop industry." In 2012, VH1 named Aguilera the eighth greatest woman in the music industry. Aguilera has also been recognized as one of the greatest vocalists of all time, and is commonly referred to as "The Voice of a Generation". Aguilera topped Cove magazine's list of "The 100 Outstanding Pop Vocalists". She was ranked fifth in MTV and Blender magazine's 2003 countdown of the 22 Greatest Voices in Music. In November 2008, Rolling Stone placed Aguilera at number 58 on its list of 100 Greatest Singers of All Time, writing that "[Aguilera] has had the finesse and power of a blues queen ever since she was a child star". At the 2013 People's Choice Awards, Aguilera was awarded the People's Voice Award, which recognized Aguilera's ability to reach millions of people across various genres. In 2013, Aguilera was one of Time's 100 Most Influential People in the World. In the article for the magazine, Celine Dion wrote, "Without a doubt, [Aguilera]'s one of the most talented artists the world has ever seen and heard, and I think she's going to continue to amaze us for many, many years to come." 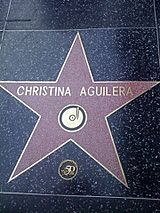 Aguilera's star on the Hollywood Walk of Fame, which she received in 2010

Aguilera is also well known for her television and music video impact; in 2012, Jon Caramanica of The New York Times commented that Aguilera "will be remembered for her glamour, her take on femme-pop, her voice and as the person who almost single-handedly reshaped music-competition reality programming". She was considered as one of the greatest women of the music video era by VH1.

Aguilera's works have earned her numerous awards and accolades, including five Grammy Awards. In November 2010, Aguilera was honored with a star on the Hollywood Walk of Fame. In October 2012, Aguilera's costumes and video collection was included on the "Women Who Rock" exhibition by the National Museum of Women in the Arts.

All content from Kiddle encyclopedia articles (including the article images and facts) can be freely used under Attribution-ShareAlike license, unless stated otherwise. Cite this article:
Christina Aguilera Facts for Kids. Kiddle Encyclopedia.