Ryan Thomas Gosling (born November 12, 1980) is a Canadian actor and musician. He began his career as a child star on the Disney Channel's The Mickey Mouse Club (1993–1995), and went on to appear in other family entertainment programs, including Are You Afraid of the Dark? (1995) and Goosebumps (1996). His first starring film role was as a Jewish neo-Nazi in The Believer (2001), and he went on to star in several independent films, including Murder by Numbers (2002), The Slaughter Rule (2002), and The United States of Leland (2003).

Gosling gained wider recognition in 2004 with a leading role in the commercially successful romance The Notebook. For playing a drug-addicted teacher in Half Nelson (2006), he was nominated for an Academy Award for Best Actor, and he next played a socially inept loner in Lars and the Real Girl (2007). After a three-year acting hiatus, Gosling starred in the marital drama Blue Valentine (2010). Gosling co-starred in three mainstream films in 2011, the romantic comedy Crazy, Stupid, Love, the political drama The Ides of March, and the action drama Drive. His directorial debut, Lost River, was released to poor reviews in 2014. Greater success came to Gosling when he starred in several critically acclaimed films, including the financial satire The Big Short (2015), and the romantic musical La La Land (2016), for which he won the Golden Globe Award for Best Actor – Motion Picture Musical or Comedy, and received a second Oscar nomination. Further acclaim followed with the science fiction Blade Runner 2049 (2017) and the biopic First Man (2018).

Gosling's band, Dead Man's Bones, released their self-titled debut album and toured North America in 2009. He is a co-owner of Tagine, a Moroccan restaurant in Beverly Hills, California. Gosling is a supporter of PETA, Invisible Children, and the Enough Project and has travelled to Chad, Uganda and eastern Congo to raise awareness about conflicts in the regions. Gosling has been involved in peace promotion efforts in Africa for over a decade. He has been in a relationship with actress Eva Mendes since 2011, and they have two daughters. 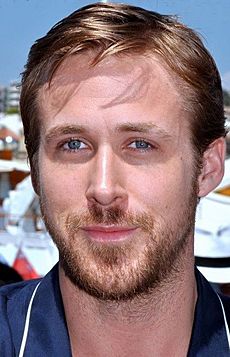 Gosling at the 2011 Cannes Film Festival

Gosling previously resided in New York City with his mixed-breed dog, George. He co-owns Tagine, a Moroccan restaurant in Beverly Hills, California. He bought the restaurant on an impulse; he has said that he spent "all [his] money" on it, spent a year doing the renovation work himself, and now oversees the restaurant's menus.

Gosling dated his Murder by Numbers co-star Sandra Bullock from 2002 to 2003. Gosling was in a relationship his co-star from The Notebook, fellow Canadian Rachel McAdams, from mid‑2005 to mid‑2007, before they briefly reunited in 2008.

In September 2011, Gosling began dating his The Place Beyond the Pines co-star Eva Mendes. He has two daughters with Mendes, one born September 2014 and the second in April 2016.

Gosling is supportive of various social causes. He has worked with PETA on a campaign to encourage KFC and McDonald's to use improved methods of chicken slaughter in their factories, and on a campaign encouraging dairy farmers to stop de-horning cows. Gosling volunteered in Biloxi, Mississippi in 2005, as part of the clean-up effort following Hurricane Katrina. He is a supporter of Invisible Children, Inc., a group that raises awareness about the LRA in Central Africa. In 2005, Gosling travelled to Darfur refugee camps in Chad. He was a speaker at Campus Progress's National Conference in 2008 where he discussed Darfur. As part of his work with the Enough Project, he visited Uganda in 2007 and eastern Congo in 2010.

All content from Kiddle encyclopedia articles (including the article images and facts) can be freely used under Attribution-ShareAlike license, unless stated otherwise. Cite this article:
Ryan Gosling Facts for Kids. Kiddle Encyclopedia.