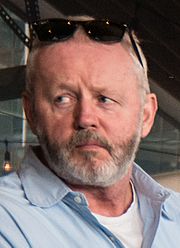 David Bowditch Morse (born October 11, 1953) is an American movie, television, stage, and voice actor. He is known for playing Brutus "Brutal" Howell in the 1999 movie The Green Mile.

He was born in Hamilton, Massachusetts. He has been married to Susan Wheeler Duff since 1982. They have 3 children.

All content from Kiddle encyclopedia articles (including the article images and facts) can be freely used under Attribution-ShareAlike license, unless stated otherwise. Cite this article:
David Morse Facts for Kids. Kiddle Encyclopedia.