Kirsten Caroline Dunst (born April 30, 1982) is an American actress. She made her debut in the 1989 anthology film New York Stories. At the age of twelve, Dunst gained widespread recognition as Claudia in Interview with the Vampire (1994), for which she was nominated for a Golden Globe for Best Supporting Actress. She appeared in Little Women the same year and in Jumanji the following year.

Dunst achieved fame for her portrayal of Mary Jane Watson in Sam Raimi's Spider-Man trilogy (2002–2007). In 2011, she won Best Actress at Cannes for her performance in Lars von Trier's Melancholia.

In 2015, Dunst starred as Peggy Blumquist on the second season of the television series Fargo. Her performance garnered critical acclaim, leading to her winning the Critics' Choice Television Award for Best Actress, and being nominated for Golden Globe and Primetime Emmy awards.

In 2017, Dunst received a Screen Actors Guild Award for her performance in the film Hidden Figures, and co-starred in her third collaboration with Sofia Coppola, The Beguiled. 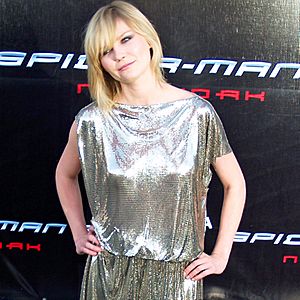 Dunst was born in Point Pleasant, New Jersey, to Klaus Hermann Dunst and Inez Rupprecht, she has a younger brother. Dunst's father is German, originally from Hamburg, and her mother was born in New Jersey, of German and Swedish descent.

Until the age of eleven, Dunst lived in Brick Township, New Jersey, where she attended Ranney School. In 1993, her parents separated, and she moved with her mother and brother to Los Angeles, where she attended Laurel Hall School in North Hollywood and Notre Dame High School. Among her classmates was Rami Malek, who was a grade above; they were both in a musical theater class. After graduating from high school in 2000, Dunst continued acting.

Dunst began her career when she was three years old as a child fashion model in television commercials. She was signed with Ford Models and Elite Model Management.

At the age of six, she made her feature film debut in a minor role in a Woody Allen short film in 1989. Soon after, Dunst performed in the comedy-drama The Bonfire of the Vanities (1990), in which she played the daughter of Tom Hanks's character. In 1993, Dunst made a guest appearance in an episode of the science fiction drama Star Trek: The Next Generation. 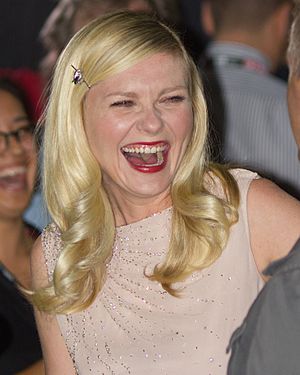 Dunst began dating her Fargo co-star Jesse Plemons in 2016. As of 2018, they are engaged. Dunst gave birth to their son in May 2018, in Santa Monica, California, she gained German citizenship in 2011, which enabled her to film in Europe without a problem and holds dual citizenship of Germany and the United States.

Dunst bought a home in Toluca Lake, Los Angeles, California, in 2001. In 2010, she sold a residence in Nichols Canyon, Los Angeles. She also lived in a Lower Manhattan apartment which she listed for sale in 2017.

Dunst works with the Elizabeth Glaser Pediatric AIDS Foundation, for which she helped design and promote a necklace whose sales proceeds went to the Foundation. She worked in breast cancer awareness, participating in the Stand Up to Cancer telethon in September 2008 to raise funds for cancer research. On December 5, 2009, she participated in the Teletón in Mexico, to raise funds for cancer treatment and children's rehabilitation.

All content from Kiddle encyclopedia articles (including the article images and facts) can be freely used under Attribution-ShareAlike license, unless stated otherwise. Cite this article:
Kirsten Dunst Facts for Kids. Kiddle Encyclopedia.