Brick Township (also commonly known as Bricktown or Brick) is a township in Ocean County, New Jersey, United States. As of the 2010 United States Census, the township had a population of 75,072, making it the state's 13th-largest municipality and the third most populous municipality in Ocean County (behind Lakewood Township and Toms River Township), having seen a decline of 1,047 residents (-1.4%) from its population of 76,119 in the 2000 Census, when it was the state's 12th most-populous municipality.

While the majority of Brick Township is located on the mainland, Ocean Beaches I, II and III are situated on the Barnegat Peninsula, a long, narrow barrier peninsula that separates Barnegat Bay from the Atlantic Ocean. The mainland and beach area of the town are not geographically adjacent. Brick Township was incorporated as a township by an act of the New Jersey Legislature on February 15, 1850, from portions of both Dover Township (now Toms River Township) and Howell Township. The township was named after Joseph Brick, the owner of Bergen Iron Works located on the Metedeconk River. Portions of the township were taken to form Point Pleasant Beach (May 18, 1886), Bay Head (June 15, 1886), Lakewood Township (March 23, 1892), Mantoloking (April 10, 1911) and Point Pleasant (April 21, 1920). In 1963, voters rejected a referendum that would have changed the township's name to "Laurelton".

The Havens Homestead Museum is dedicated to the Havens family that originally settled in the Laurelton/Burrsville section of Brick. The museum is the original Havens home which lies on a small plot of farmland. The museum has a gift shop and runs tours of the property daily.

After hovering for years in the top five, in 2006, the township earned the title of "America's Safest City", out of 371 cities included nationwide in the 13th annual Morgan Quitno survey. Since the year 2000, Brick Township has been the safest "city" (population over 75,000) in New Jersey. In 2003 and 2004, Brick Township was ranked as the second safest city in the United States, after Newton, Massachusetts. In 2005, Brick Township had dropped down to the fifth safest "city" (population over 75,000) in the United States, before it rebounded to the top in 2006. In 2009, Brick Township ranked No. 6 on Newsmax magazine's list of the "Top 25 Most Uniquely American Cities and Towns," a piece written by current CBS News travel editor Peter Greenberg. In determining his ranking, Greenberg cited Brick's consistent nod as a safe city and that its "commercial development of big-box stores, department stores, and chain restaurants has made it a shopping destination for much of northern Ocean County."

Brick Township has also been in the news for a claimed autism epidemic, in which 40 children out of over 6,000 surveyed were found to be autistic, though Brick's autism rate is statistically near the national average. Many of the children found to be autistic were born in Northern New Jersey and other parts of the country. There is no evidence that the levels of autism are linked to any specific environmental factor in Brick. Parents of children diagnosed with autism have moved to the township in order to make use of the special education programs offered by the school district.

During the December 2010 North American blizzard, Brick Township received 30 inches (760 mm) of snow, the highest accumulation recorded in the state. In October 2012, parts of Brick were devastated by Hurricane Sandy. Barrier island and other waterfront properties were particularly hard hit. Homes and such buildings as the Shore Acres Yacht Club sustained major damage; some buildings had to be demolished.

The communities of Herbertsville and Parkway Pines are located close to exit 91 of the Garden State Parkway, near the Monmouth County border, and are geographically distant from the rest of the township. 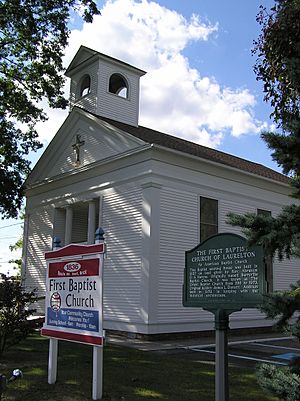 The First Baptist Church of Laurelton in Brick located on Rt. 88 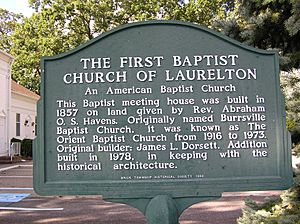 The historical plaque that adorns the church's lawn

The Laurelton Circle was located near the center of Brick Township. The traffic circle was at the junction of Route 70, Route 88 and Princeton Avenue. It was converted to a traffic light regulated intersection in 1986, due to an increase in traffic and accidents. To reduce the need for left turns, a short portion of eastbound Route 88 was re-routed onto Princeton Avenue. Some other movements are controlled by jughandles and a two-way connection in the northwest corner.

NJ Transit offers bus service between the township and the Port Authority Bus Terminal in Midtown Manhattan on the 137 route, to Philadelphia on the 317 and to Newark on the 67. Ocean Ride service is provided on route 3, 3A and 4.

All content from Kiddle encyclopedia articles (including the article images and facts) can be freely used under Attribution-ShareAlike license, unless stated otherwise. Cite this article:
Brick Township, New Jersey Facts for Kids. Kiddle Encyclopedia.