Point Pleasant Beach was incorporated as a borough by an act of the New Jersey Legislature on May 18, 1886, from portions of Brick Township, subject to the results of a referendum passed the previous day.

The borough's boardwalk is approximately one mile long, spanning the coastline from the Manasquan Inlet at the north to New Jersey Avenue in the south. The central third of the boardwalk is largely amusement rides, the Jenkinson's Aquarium, the Jenkinsons Arcades, pizza joints, ice cream parlors, games-of-chance and miniature golf courses. There are fees of up to $10 per person age 12 or over to access the various beaches, as well as parking fees of up to $2.50 per hour or more.

It was ranked the eighth-best beach in New Jersey in the 2008 Top 10 Beaches Contest sponsored by the New Jersey Marine Sciences Consortium.

The area that includes Point Pleasant Beach was first used by the Lenape Native Americans. On September 2, 1609, Henry Hudson and the crew of his ship, Half Moon, noticed the area on their way north to explore the Hudson River. Crew member Robert Juet noted in his journal, "This is a very good Land to fall with and a pleasant Land to see." The first European settlers were fisherman and farmers who first arrived in the 18th century. Summer tourism began in the early 19th century when Quaker Thomas Cook Jr. opened his farmhouse on the site of the current Antrim Elementary School to boarders, which began the trend that transformed the area into an oceanfront haven for visitors, a trend further established in the 1870 by Captain John Arnold, who built a roadway to the ocean, now known as Arnold Avenue. In 1875, he built the first bridge over the Manasquan River, linking the town to Brielle. He later convinced the Central Jersey Railroad to extend its service to Point Pleasant Beach, which it did beginning on July 3, 1880.

The Borough of Point Pleasant Beach was established on June 2, 1886. 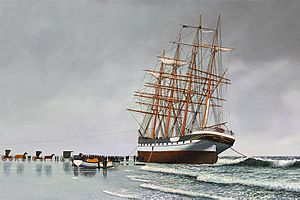 The 1870s was an era of major tourism expansion, driven by developers who subdivided old farms for vacation home lots. Captain Arnold devised Arnold City between Central and what was to become Arnold Avenue. In 1877, the Point Pleasant Land Company bought the old Forman Farm, 250 acres (1.0 km2) on what is now Route 35 South, between Forman and Elizabeth Avenues and began selling lots. In 1878, it built the four-story, 200-guest Resort House, the largest building in town. It also began a horse-drawn trolley service to attract tourists. Other hotels were built before the turn-of-the-20th century, including the largest, the Leighton, as well as the Beacon, and Zimmerman's, though many of these, including the Resort House, burnt down, succumbed to changing tastes, or were dismantled for wood during World War II. Initially, visitors focused their attention on the Manasquan River, cedar groves and farmhouses, but their interest in the ocean led to development on the waterfront, beginning with the first beachfront pavilion on Atlantic Avenue in 1880. Ten years later, the first flimsy, portable boardwalk was built, but it washed away within two years.

The original amusement area was Clark's Landing, which opened on the Manasquan River in 1892. In 1897, the decision for privately owned beaches in Point Pleasant Beach was made when, as noted in the Council minutes of August 16, "Ownership of the Beach turned down by the Council because of the extreme cost to the Borough for maintenance." In 1915, the first permanent boardwalk was built between Philadelphia and Central Avenues, and eventually expanded along the entire length of Point Pleasant Beach, but shortened to its present length by a September 1938 hurricane that destroyed its southern portion. It evolved from a mere promenade for strolling to a more active amusement area, beginning with Charles Jenkinson's construction in the 1920s of Jenkinson's Pavilion and Swimming Pool. The boardwalk pavilion became the center of nightlife, featuring sophisticated dancing, well-known big bands, and occasional live nationally broadcast radio. Today it features a number of amusement rides, video arcades, and diverse cuisine, ranging from the traditional sausage sandwich to sushi. Point Pleasant Beach hosts an annual Seafood Festival in September.

On February 12, 1900, the steel-hulled, Scottish barque, County of Edinburgh was blown ashore at high tide and became stranded. The event became national news when it was extensively reported in The New York Times, illustrated by a high quality photograph that became the resource for a famous painting by Antonio Jacobsen. The undamaged vessel was successfully re-floated on the spring tide of February 14 and continued on her voyage from Cape Town to New York.

In October 2012, Point Pleasant Beach and numerous other Jersey Shore communities, such as Seaside Heights and Long Beach Island, were devastated by Hurricane Sandy. Nearly 2,800 feet (850 m) of the borough's boardwalk was destroyed, with the cost of repairs estimated as up to $2 million.

Unincorporated communities, localities and place names located partially or completely within the township include Clark's Landing, Lovelandtown and Sunshine Harbor.

The borough borders Bay Head and Point Pleasant in Ocean County and both Brielle and Manasquan in Monmouth County.

There were 1,985 households out of which 22.5% had children under the age of 18 living with them, 43.3% were married couples living together, 8.9% had a female householder with no husband present, and 43.5% were non-families. 36.0% of all households were made up of individuals, and 12.5% had someone living alone who was 65 years of age or older. The average household size was 2.30 and the average family size was 3.04. 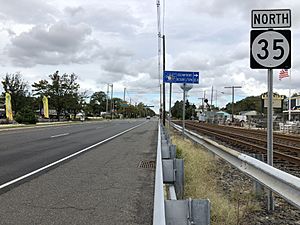 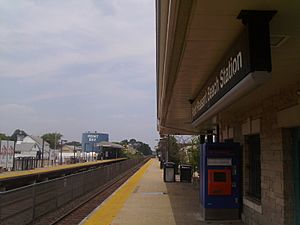 NJ Transit provides bus service between the borough and Philadelphia on the 317 route along with local service on the 830 route.

A kiddie train along the beach used to exist up until the early 1990s. In addition, a second Jenkinsons existed on the northern end of Point Pleasant Beach until the 1990s.

The Point Pleasant Beach School District serves students in pre-kindergarten through twelfth grade. As of the 2018–19 school year, the district, comprised of two schools, had an enrollment of 763 students and 78.3 classroom teachers (on an FTE basis), for a student–teacher ratio of 9.7:1. Schools in the district (with 2018–19 enrollment data from the National Center for Education Statistics) are G. Harold Antrim Elementary School 384 students in grades PreK-8 and Point Pleasant Beach High School 367 students in grades 9-12.

In addition to the students of Point Pleasant Beach, the district also serves the students of Bay Head and Lavallette for grades 9-12 and those from Mantoloking for K-12, as part of sending/receiving relationships. Some outside students attend the district's schools on a tuition basis.

People who were born in, residents of, or otherwise closely associated with Point Pleasant Beach include:

All content from Kiddle encyclopedia articles (including the article images and facts) can be freely used under Attribution-ShareAlike license, unless stated otherwise. Cite this article:
Point Pleasant Beach, New Jersey Facts for Kids. Kiddle Encyclopedia.