Brielle was formed as a borough by an act of the New Jersey Legislature on April 10, 1919, from portions of Wall Township, based on the results of a referendum passed on June 3, 1919. The borough was named for Brielle, a town in the Netherlands.

Archaeological excavations along what is now Birch Drive reveal temporary Lenape Native American settlements. The Lenape practiced farming in other parts of Monmouth County much of the year, and they visited the wooded areas in what is now Brielle for hunting and fishing.

The area was originally part of Shrewsbury Township and the first settlers were primarily farmers, and the area became known as Union Landing. In colonial times, salt was an important preservative, and before the American Revolutionary War, most of it was imported from Great Britain. The Union Salt Works opened around the outbreak of the war, and on April 5, 1778, several British Loyalists attacked and burned the salt works and other buildings. A year later, the salt works reopened and continued to operate through the duration of the war.

Early in the 19th century, Shrewsbury Township was divided, and the area became part of Howell Township which was further divided in 1851, when the area became part of Wall Township. On July 7, 1881, a group of businessmen purchased several acres of land and formed the Brielle Land Association with the intention of building vacation homes. The quaint riverside charm of the area reminded one of the developers of another pastoral town on a river which he had visited, Brielle, in the Netherlands.

Author Robert Louis Stevenson vacationed in Brielle for most of May 1888. During his stay he wrote a portion of his book The Master of Ballantrae and gave Osborn Island the nickname "Treasure Island" which was the title of one of his previous books. 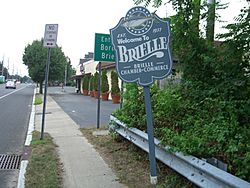 Brielle welcome sign at the border with Manasquan on Union Avenue.

Located at the southeastern corner of Monmouth County, Brielle is bordered to the north and east by the Manasquan, to the west by Brick Township (in Ocean County) and Wall Township and to the south by Point Pleasant and Point Pleasant Beach across the Manasquan River. Route 35 runs through the middle of the town and Route 70 runs along its western edge.

The borough is primarily a residential community of single homes, with a few condominiums; there are almost no undeveloped lots of land left. There are several businesses located along Union Avenue and Higgins Avenue and some marinas along the Manasquan River. Ripley's Believe It or Not! once stated that Brielle has "16 bars and no churches". It currently has one church, The Church in Brielle (formerly the Dutch Reformed Church) and several restaurants that have liquor licenses, but no true bars. There is also a 140 acres (0.57 km2) 18 hole golf course called the Manasquan River Golf Club.

The town has approximately 6.4 kilometers (4.0 mi) of waterfront along the Manasquan River, Glimmerglass, and Debbie's Creek, all of which are salt water and tidal. Brielle's borders extend to an 8-acre (32,000 m2) island in the Manasquan River.

Manasquan Park is an unincorporated community located within Brielle.

There were 1,805 households out of which 33.4% had children under the age of 18 living with them, 60.4% were married couples living together, 10.3% had a female householder with no husband present, and 26.0% were non-families. 22.0% of all households were made up of individuals, and 9.9% had someone living alone who was 65 years of age or older. The average household size was 2.64 and the average family size was 3.13.

NJ Transit provides bus transportation between the borough and Philadelphia on the 317 route and local service on the 830 route.

NJ Transit's North Jersey Coast Line travels through Brielle, but does not stop in the borough. The nearest station is the Manasquan station. 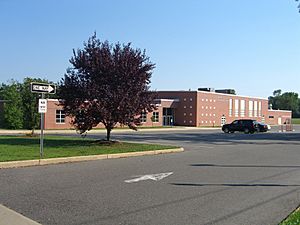 The Brielle School District serves public school students in pre-kindergarten through eighth grade at Brielle Elementary School. As of the 2017–18 school year, the district, comprised of one school, had an enrollment of 540 students and 48.3 classroom teachers (on an FTE basis), for a student–teacher ratio of 11.2:1.

For ninth through twelfth grades, public school students attend Manasquan High School in Manasquan, as part of a sending/receiving relationship with the Manasquan Public Schools, joining students from Avon-by-the-Sea, Belmar, Lake Como, Sea Girt, Spring Lake and Spring Lake Heights at the school. As of the 2017–18 school year, the high school had an enrollment of 945 students and 71.4 classroom teachers (on an FTE basis), for a student–teacher ratio of 13.2:1.

The Brielle Public Library, which is located at 610 South Street, claims to have been the first library in New Jersey to have offered public access to the Internet.

People who were born in, residents of, or otherwise closely associated with Brielle include:

All content from Kiddle encyclopedia articles (including the article images and facts) can be freely used under Attribution-ShareAlike license, unless stated otherwise. Cite this article:
Brielle, New Jersey Facts for Kids. Kiddle Encyclopedia.