Manasquan was formed as a borough by an act of the New Jersey Legislature on December 30, 1887, from portions of Wall Township, based on the results of a referendum held the previous day.

New Jersey Monthly magazine ranked Manasquan as its 22nd best place to live in its 2008 rankings of the "Best Places To Live" in New Jersey.

The borough borders the municipalities of Brielle, Sea Girt and Wall Township in Monmouth County; and Point Pleasant Beach in Ocean County.

There were 2,374 households out of which 27.3% had children under the age of 18 living with them, 52.5% were married couples living together, 9.1% had a female householder with no husband present, and 34.7% were non-families. 28.9% of all households were made up of individuals, and 10.7% had someone living alone who was 65 years of age or older. The average household size was 2.48 and the average family size was 3.10.

The Manasquan Boardwalk is largely quiet after Labor Day, as seen in this comparative shot facing north, taken in mid-July (left) and late September (right).

Due to its location bordering the Atlantic Ocean, the population of Manasquan increases dramatically in the summer months as tourists flock to the beach.

The Manasquan Inlet provides surfers with waves that are corralled, refracted and enlarged by the jetty protruding out into the Atlantic Ocean. The Manasquan Inlet, reopened in 1931, is the northern terminus of the inland portion of the Intracoastal Waterway.

Manasquan has a downtown area with many small businesses. Algonquin Arts Theatre has shows and movies that play throughout the year. It is a historic 540-seat theatre, built in 1938 as a movie house but converted to a professional live performance space in May 1994.

The demolition of traditional beach bungalows and their replacement with much larger single-family dwellings has helped turn Manasquan into a year-round community. The decrease in tourism and rise in residency can be attributed to the decline of once popular tourist destinations. Manasquan no longer has a 24-hour diner or a miniature golf course, and has lost many of the bars once located in its borders. During the summer months, the local bar and party scene overwhelm the area between Brielle Road and Main Street from the bridges to the ocean, especially with local bars - Leggetts and The Osprey - contributing greatly to the amount of party goers in the town.

The Firemans' Fair occurs every July/August. The fair is the largest source of funds for Manasquan Volunteer Engine Company #2 and dates back to 1974.Though it was on a decade-long hiatus until the late 1990s, the five day-long festivities in 2011 were expected to draw 30,000 attendees.

Manasquan was home to the Cat Fanciers' Association (CFA), the largest registry of pedigreed cats in the world, until 2010. 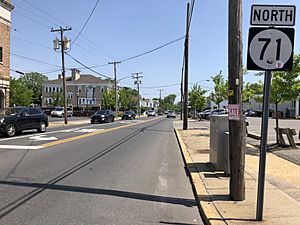 Route 71, the most significant highway in Manasquan

Route 71 is the most significant highway running directly through the borough. The Garden State Parkway is the nearest major highway. 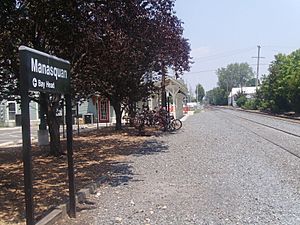 NJ Transit provides bus transportation between Manasquan and Philadelphia on the 317 route and local service on the 830 route.

The Manasquan Public Schools serves students from kindergarten through twelfth grade. As of the 2018–19 school year, the district, comprised of two schools, had an enrollment of 1,548 students and 138.9 classroom teachers (on an FTE basis), for a student–teacher ratio of 11.1:1. Schools in the district (with 2018–19 enrollment data from the National Center for Education Statistics) are Manasquan Elementary School with 545 students in grades K-8 and Manasquan High School with 969 students in grades 9-12. In addition to students from Manasquan, the district's high school also serves public school students from Avon-by-the-Sea, Belmar, Brielle, Lake Como, Sea Girt, Spring Lake, and Spring Lake Heights, who attend Manasquan High School as part of sending/receiving relationships with their respective districts. The two Manasquan public school buildings are across from each other on Broad Street, with Board of Education offices next door to the high school.

The Roman Catholic-affiliated St. Denis School served youth from pre-school through 8th grade under the auspices of the Roman Catholic Diocese of Trenton. In 2014, the diocese announced that the school was closing at the end of the 2014–15 school year, as fewer students were attending, with enrollment having fallen from a peak of nearly 400 in the 1970s to 107 in 2014.

People who were born in, residents of, or otherwise closely associated with Manasquan include:

All content from Kiddle encyclopedia articles (including the article images and facts) can be freely used under Attribution-ShareAlike license, unless stated otherwise. Cite this article:
Manasquan, New Jersey Facts for Kids. Kiddle Encyclopedia.