Kids Encyclopedia Facts
Not to be confused with Roychester, Pennsylvania.

Rochester is a borough in Beaver County, Pennsylvania, United States. Located 25 miles (40 km) northwest of Pittsburgh, it is part of the Pittsburgh metropolitan area. The population was 3,657 at the 2010 census.

Like many places around Pittsburgh, Rochester was a former industrial hub, home to the H. C. Fry Glass Company, and was a major junction on the Pennsylvania Railroad. Recently, Rochester has been a background for films, including the 1986 movie Gung Ho, the 1996 movie Kingpin, and the 2000 movie Wonder Boys.

What would eventually become Rochester was originally a Lenape village called Sawcunk before being settled in 1799 in what was then the American frontier by white settlers. During this time, what would eventually become Rochester was known as East Bridgewater, Fairport, and Beaver Point. The borough adopted its current name in 1834 when a local businessman who did regular business in Pittsburgh decided to christen his home with the name Rochester so he could have a unique name to stamp his goods; the borough would officially be incorporated as such in 1849.

Many of the streets that run through Rochester today had different names based on wild animals. Virginia Avenue and Adams Street—two of the cities main thoroughfares via Pennsylvania Route 68—were once known as Fox Lane and Tiger Lane, respectively. Deer Lane, which still exists today, is the last remnant of the original naming scheme for the street grid in the borough.

Rochester is where Henry Clay Fry and his associates formed a glass manufacturing company following Fry's return from the American Civil War. In 1897 the Rochester Tumbler Company (as the company was known) became the National Glass Company of Rochester. The company helped to revolution glass production by investing a new method for cutting glass by pressing it into a mold where previously the technique of cut glass had only been to blow it by hand. At its height, the National Glass Company of Rochester employed over a 1000 people but its bankruptcy during the Great Depression began a long decline in the town's population which continues up to today.

Rochester was a railroad junction for the Pennsylvania Railroad and sat along the railroad's mainline from the Eastern United States to Chicago. 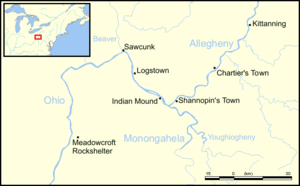 Native American villages were located throughout Western Pennsylvania, with the town of Sawcunk being at the site of present-day Rochester.

All content from Kiddle encyclopedia articles (including the article images and facts) can be freely used under Attribution-ShareAlike license, unless stated otherwise. Cite this article:
Rochester, Pennsylvania Facts for Kids. Kiddle Encyclopedia.