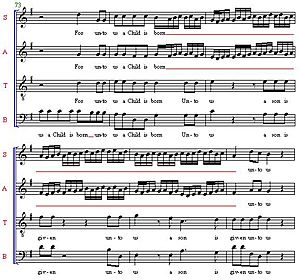 Handel Messiah - For Unto Us a Child is Born excerpt.

In music, a melisma is the technique of singing one syllable to a lot of notes. They are often called vocal runs or simply runs. Music which uses melismas can be called melismatic.

In Western music melismas are often used in operas or any other music which is written for the singer to show off the voice. Melismatic music is the opposite of music where each syllable has its own note. In the "Alleluia Chorus" from Handel's Messiah each syllable of the word "Alleluya" has its own note. But in other parts of the Messiah there are often melismas, e.g. in "Thus saith the Lord" the word "shake" ("and I will shake the heavens and the earth") is set to a run of 25 fast notes. This example can also be described as "word painting". Handel uses the melisma to make it sound like someone shaking something.

Melismas are used a lot in music from many different cultures.

All content from Kiddle encyclopedia articles (including the article images and facts) can be freely used under Attribution-ShareAlike license, unless stated otherwise. Cite this article:
Melisma Facts for Kids. Kiddle Encyclopedia.