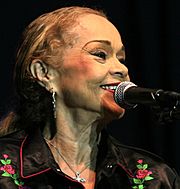 Etta James (born Jamesetta Hawkins, January 25, 1938 - January 20, 2012) was an American singer. She was born in Los Angeles, California. Her styles included jazz, blues, soul and R&B. She received many awards during her career. She was active for almost sixty years. James died of leukemia in Riverside, California at 73, just before her 74th birthday. Beyoncé Knowles played James in the 2008 musical Cadillac Records. James released her last album The Dreamer in 2011. The album is a collection of covers.

James won six Grammy Awards. One of them was the Grammy Lifetime Achievement Award. She was given the award in 2003. James was put in the Rock and Roll Hall of Fame in 1993.

All content from Kiddle encyclopedia articles (including the article images and facts) can be freely used under Attribution-ShareAlike license, unless stated otherwise. Cite this article:
Etta James Facts for Kids. Kiddle Encyclopedia.