B.B. King was born in Indianola, Mississippi. His father left the family and his mother was too poor to raise him, and so lived with his grandmother, Elnora Farr, in Kilmichael, Mississippi. There he sang in the gospel choir at Elkhorn Baptist Church. At the age of 15, he bought his first guitar. His idols were blues musician T-Bone Walker and jazz musicians like Charlie Christian and Django Reinhardt. In 1943, he left the town and worked as a tractor driver. King performed on Sonny Boy Williamson's radio program on KWEM in West Memphis, Arkansas. People liked his sound and B.B was invited to the Sixteenth Avenue Grill in West Memphis and later, to a ten-minute spot on the Memphis, Tennessee radio station WDIA. This spot became so popular that it was expanded and became the "Sepia Swing Club." During his work for the radio station, he got his nickname "Beale Street Blues Boy", which was later shortened to B.B. (Beale Street is an actual street in Memphis).

In 1949, King began recording songs for RPM Records from Los Angeles. Under the leadership of Millard Lee, King formed his own band. He called it the B.B. King Review, and went on tours. 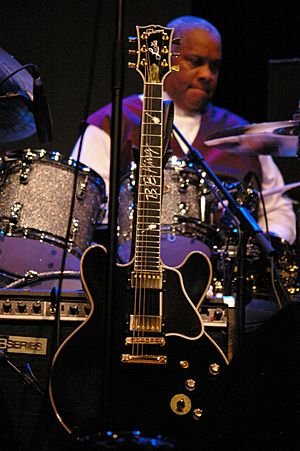 In the winter of 1949, he played at a dance hall in Twist, Arkansas. The hall was heated by burning barrels filled with kerosine. During his performance, two men started a fight and knocked over one of the barrels. This caught the dance hall on fire and everyone evacuated. After he was outside, King learned that he had left his guitar and he ran inside to get it. The next day, he found out that the fight was started over a woman named Lucille, and he named the guitar "Lucille."

In the 1960s King lost importance for black listeners but could reach the white music fans. Many white guitarists like Eric Clapton have named him as an influence. King played at rock concerts and music venues of the hippie culture like the Fillmore West. He also reached #15 in the U.S. pop charts with his title "The Thrill Is Gone". From the 1980s onward he continued his career, appearing on numerous television shows and performing 300 nights a year. The title "When Love Comes To Town," which he performed together with the rock band U2, introduced him to a younger audience.

B.B. King was married two times. The marriages ended because of the burden of more than 200 concerts a year. It is reported that he is the father of 15 children. He lived with Type 2 diabetes for over twenty years and was a famous spokesman in the fight against the disease.

King died at the age of 89 in Las Vegas, Nevada, on May 14, 2015, from complications of Alzheimer's disease along with congestive heart failure and diabetic complications. On May 30, 2015, King's funeral was held at the Bell Grove Missionary Baptist Church in Indianola, Mississippi. He was buried at the museum.

B.B. King has made guest appearances in many popular television shows, including The Cosby Show, The Young and the Restless, General Hospital, The Fresh Prince of Bel-Air, Sesame Street, Married... with Children, Sanford and Son, and Touched by an Angel. He has also made a cameo in the movie Spies Like Us. In the movie Blues Brothers 2000, he was the leader of The Louisiana Gator Boys, a blues supergroup, which battles against the Blues Brothers. 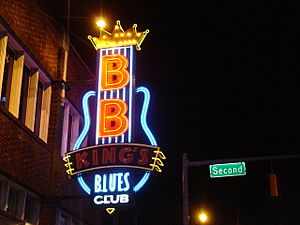 B.B. King owned a chain of restaurants with concert venues in the United States. The first was opened on Beale Street in Memphis in 1991. 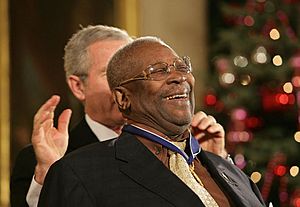 B.B. King gets the Presidential Medal of Freedom

Some important albums are:

All content from Kiddle encyclopedia articles (including the article images and facts) can be freely used under Attribution-ShareAlike license, unless stated otherwise. Cite this article:
B.B. King Facts for Kids. Kiddle Encyclopedia.