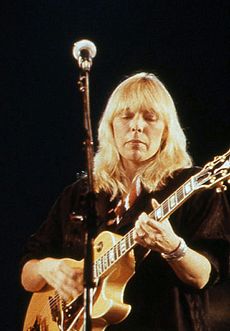 Singer-songwriters are popular musicians who write and perform their own works. They often accompany themselves on acoustic guitar or piano. Singer-songwriters compose the music, write the lyrics, sing, play the musical instruments, and often manage themselves. For them, the song is more important than their performance of it.

The term became popular in the 1960s. It referred to a specific type of performers who wrote certain kinds of music and lyrics.

All content from Kiddle encyclopedia articles (including the article images and facts) can be freely used under Attribution-ShareAlike license, unless stated otherwise. Cite this article:
Singer-songwriter Facts for Kids. Kiddle Encyclopedia.