Beale Street is a street in Downtown Memphis, Tennessee, which runs from the Mississippi River to East Street, a distance of approximately 1.8 miles (2.9 km). It is a significant location in the city's history, as well as in the history of blues music. Today, the blues clubs and restaurants that line Beale Street are major tourist attractions in Memphis. Festivals and outdoor concerts frequently bring large crowds to the street and its surrounding areas. 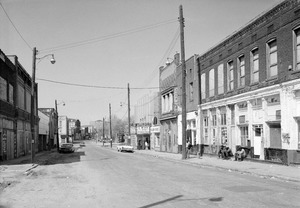 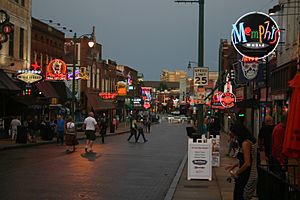 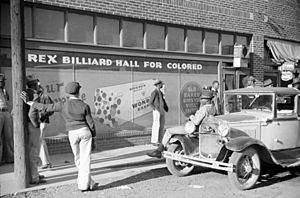 Beale Street was created in 1841 by entrepreneur and developer Robertson Topp (1807–1876), who named it for a forgotten military hero. (The original name was Beale Avenue.) Its western end primarily housed shops of trade merchants, who traded goods with ships along the Mississippi River, while the eastern part developed as an affluent suburb. In the 1860s, many black traveling musicians began performing on Beale. The first of these to call Beale Street home were the Young Men's Brass Band, who were formed by Sam Thomas in 1867.

In the 1870s, the population of Memphis was rocked by a series of yellow fever epidemics, leading the city to forfeit its charter in 1879. During this time, Robert Church purchased land around Beale Street that would eventually lead to his becoming the first black millionaire from the south. In 1890, Beale Street underwent renovation with the addition of the Grand Opera House, later known as the Orpheum. In 1899, Church paid the city to create Church Park at the corner of 4th and Beale. It became a recreational and cultural center, where blues musicians could gather. A major attraction of the park was an auditorium that could seat 2,000 people. Speakers in the Church Park Auditorium included Woodrow Wilson, Booker T. Washington, and Franklin D. Roosevelt.

Beale Street Baptist Church, Tennessee's oldest surviving African American Church edifice built beginning in 1869, was also important in the early civil rights movement in Memphis. In 1889, NAACP co-founder Ida B. Wells was a co-owner and editor of an anti-segregationist paper called Free Speech based on Beale before her presses were destroyed by a white mob. In the early 1900s, Beale Street was filled with many clubs, restaurants and shops, many of them owned by African-Americans.

In 1903, Mayor Thornton was looking for a music teacher for his Knights of Pythias Band and called Tuskegee Institute to talk to his friend, Booker T. Washington, who recommended a trumpet player in Clarksdale, Mississippi named W. C. Handy. Mayor Thornton contacted Handy, and Memphis became the home of the musician who created the "Blues on Beale Street". Mayor Thornton and his three sons also played in Handy's band.

In 1909, W. C. Handy wrote "Mr. Crump" as a campaign song for political machine leader E. H. Crump. The song was later renamed "The Memphis Blues." Handy also wrote a song called "Beale Street Blues" in 1916 which influenced the change of the street's name from Beale Avenue to Beale Street. From the 1920s to the 1940s, Louis Armstrong, Muddy Waters, Albert King, Memphis Minnie, B. B. King, Rufus Thomas, Rosco Gordon and other blues and jazz legends played on Beale Street and helped develop the style known as Memphis Blues. As a young man, B. B. King was billed as "the Beale Street Blues Boy." One of Handy's proteges on Beale Street was the young Walter Furry Lewis, who later became a well known blues musician. In his later years Lewis lived near Fourth and Beale, and in 1969 was recorded there in his apartment by Memphis music producer Terry Manning.

In 1934, local community leader George Washington Lee authored Beale Street: Where the Blues Began; the first book by a black author to be advertised in the Book of the Month Club News.

In 1938, Lewis O. Swingler, editor of the Memphis World Newspaper, a Negro newspaper, in an effort to increase circulation, conceived the idea of a "Mayor of Beale St.," having readers vote for the person of their choice. Matthew Thornton, Sr., a well-known community leader, active in political, civic and social affairs and one of the charter members of the Memphis Branch of the NAACP, won the contest against nine opponents and received 12,000 of the 33,000 votes cast. Mr. Thornton was the original "Mayor of Beale St." an honorary position that he retained until he died in 1963 at the age of 90.

By the 1960s, Beale had fallen on hard times and many businesses closed, even though the section of the street from Main to 4th was declared a National Historic Landmark on May 23, 1966. On December 15, 1977, Beale Street was officially declared the "Home of the Blues" by an act of Congress. Despite national recognition of its historic significance, Beale was a virtual ghost town after a disastrous urban renewal program that razed blocks of buildings in the surrounding neighborhood, as well as a number of buildings on Beale Street.

The day-to-day management of Beale Street was turned over to the City of Memphis in an October, 2012 court decision after a long legal dispute involving the city, BSDC and Performa.

During the first weekend of May (sometimes including late April), the Beale Street Music Festival brings major music acts from a variety of musical genres to Tom Lee Park at the end of Beale Street on the Mississippi River. The festival is the kickoff event of a month of festivities citywide known as Memphis in May.

In 2020, in Memphis, the Beale Street Historic District and the WDIA radio station were added to the U.S. Civil Rights Trail.

All content from Kiddle encyclopedia articles (including the article images and facts) can be freely used under Attribution-ShareAlike license, unless stated otherwise. Cite this article:
Beale Street Facts for Kids. Kiddle Encyclopedia.