Tom Lee Park is a city park located to the immediate west of downtown Memphis, Tennessee, overlooking the Mississippi River. Encompassing about 30 acres (12 ha) parallel to the Mississippi River for about one mile (1.6 km), it offers panoramic views of the Mississippi River and the shores of Arkansas on the opposite side. The park is named after Tom Lee, an African-American riverworker, who saved the lives of 32 passengers of the sinking steamboat M.E. Norman in 1925.

Tom Lee Park is a popular location for walkers, joggers, roller bladers and cyclists, and hosts one event per year, the Beale Street Music Festival that kicks off Memphis in May.

Tom Lee Park is approximately one mile (1.6 km) long, but not more than 400 ft (120 m) wide at any point. It encompasses about 30 acres (12 ha), running south from Beale Street, bounded by the Mississippi River to the west, and Riverside Blvd to the east, offering panoramic views of the Mississippi River.

Luxury homes and condominiums line the top of the bluff overlooking the park and the river. 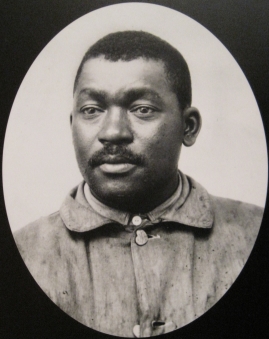 Late during the afternoon of May 8, 1925, Lee steered his 28 ft (8.5 m) skiff Zev upriver after delivering an official to Helena, Arkansas.

Also on the river was the steamboat  M.E. Norman, carrying members of the Engineers Club of Memphis, the American Society of Civil Engineers, and their families.

Tom Lee witnessed M.E. Norman capsize in the swift current 15 mi (24 km) downriver from Memphis at Cow Island Bend. Although he could not swim, he rescued 32 people with five trips to shore. Lee acted quickly, calmly and with no regard for his own safety, continuing to search after night fell. Because of his efforts, only 23 people died.

To honor the hero, the Memphis Engineers Club raised enough money to purchase a house for Lee and his wife.

Tom Lee died of cancer on April 1, 1952 at John Gaston Hospital. Two years after his death, the park along the Memphis Riverfront was named in his honor and a granite obelisk was erected. The obelisk was destroyed once in 2003 in the aftermath of Hurricane Elvis and again during strong storms in May 2017.

In October 2006, a bronze sculpture by artist David Alan Clark was erected in the park to commemorate the event and to honor the civil hero. The sculpture depicts the rescue of a survivor saved from drowning in the Mississippi River. 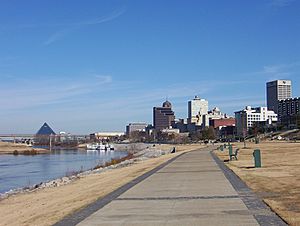 The annual Memphis in May celebration is a high-profile event in the park.

The Beale Street Music Festival is a three-day event during the Memphis in May celebration, hosting over 60 musical acts each year on four stages, in diverse genres such as blues, hip-hop, and metal.

The World Championship Barbecue Cooking Contest, held the third weekend of May, is the world's largest pork barbecue cooking competition, attracting hundreds of competitors to Tom Lee Park from around the world.

All content from Kiddle encyclopedia articles (including the article images and facts) can be freely used under Attribution-ShareAlike license, unless stated otherwise. Cite this article:
Tom Lee Park Facts for Kids. Kiddle Encyclopedia.