Memphis in May facts for kids

Memphis in May International Festival is a month-long festival held in Memphis, Tennessee. The festival, which is saluting Ghana in 2021, honors a specific foreign country every year and features many events. The Beale Street Music Festival takes place the first weekend in May and showcases an eclectic lineup of national and local musical talent. International Week is a series of exhibits, screenings, arts and performances dedicated to each year's honored country. The World Championship Barbecue Cooking Contest has become one of the most popular barbecue contests in the country and has been here for 43 years. The Great American River Run Half Marathon & 5K welcomes runners of all experience levels through the streets of Memphis and along the banks of the Mississippi River, while 901Fest is a unique celebration that includes a salute to all things Memphis.

The Beale Street Music Festival is a three-day music festival that has both a mix of big-name stars and local musical acts. Held during the first weekend of May in the city's Tom Lee Park at the foot of Beale Street, it is considered to be the kick-off event of the entire Memphis in May International Festival celebration. It typically hosts over 100,000 people during the weekend. The Beale Street Music Festival is the only program that has been held every year since the inception of Memphis in May in 1977. Its history can be traced back to the 1800s, when African-American musicians throughout the South would come to Beale Street and perform.

Every year the festival recognizes a different country, most recently saluting the Czech Republic in 2018. A week of events that typically begin the day after the Beale Street Music Fest, International Week is dedicated to a country and showcases the foods and culture of that nation. While International Week provides a learning experience for the community at large, the core is a comprehensive educational program for area youth in public and private schools throughout Memphis and Shelby County. The goal of International Week is for area students, by the time they graduate from high school, to have had the opportunity to experience the customs and cultures of 12 countries. The festival's first two honored countries — Japan and Canada – have been featured twice. Perhaps most important are the trade delegates that visit Memphis and have introductions to suitable, high-level trade partners.

Through the years, the Memphis in May International Festival has played host to ambassadors, exhibits and performance troupes from 38 countries. The milestone twentieth annual event in 1996 honored all previous selected countries. The 2019 event honored the bicentennials of the founding of the city of Memphis and of the establishment of Shelby County. The West African nation of Ghana, originally selected for honor in 2020, is slated for focus during festivities in 2021.

This is a redirect from a title with a different name.

Pages using this link may be updated to link directly to the target page. It is not necessary to replace these redirected links with a piped link.

For more information, follow the link to "Category:Redirects from other names".

The WCBCC started in 1978 with 26 teams. The contest drew 50 teams in 1979, 80 in 1980, and 180 teams from nine states in 1981. It has now grown to be the largest pork barbecue competition in the world. More than 250 teams from 20+ states and several countries compete, and an estimated 100,000 people attend the competition. Media from around the world, including BBC and The Food Network, come to the city to cover the event.

Credit for the original idea of a barbecue contest goes to Rodney Baber, chairman of the Memphis in May events committee in 1977, and his co-worker Jack Powell, Tennessee's reigning chili champ at the time.

The original champion at the first competition was Bessie Louise Cathey, who won a $500 prize, a sizable return for her $12 entry fee. Today, the prizes for each event range from $300 to $15,000 for the main cooking competition, and from $250 to $2,500 for the ancillary contests. Today's entry fees range from $700 to $2,600 just for renting the necessary booth space, and an extra $60 per competition entry. Some teams regularly budget amounts in excess of $15,000 just for the competition and booth.

In 1989, when MIM officials discovered that there was a feast in Honolulu which earned the title of "largest barbecue" in the Guinness Book of Records, they calculated the amount of food prepared at the WCBCC. The total was 55,297 pounds of pork, and thus earned the WCBCC a record in the 1990 edition. Over 16 tons of pork were smoked at the 2016 WCBCC.

The 2017 World Championship Barbecue Cooking Contest was the first time the event spanned four days instead of three. In addition, the Big Bob Gibson Bar-B-Q team became the first five-time champion of the event (2017, '14, '11, '03, '00). 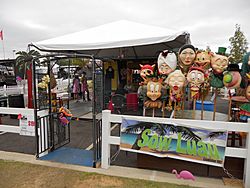 The competition has three official meat categories: rib, shoulder and whole hog. There is also the Patio Porkers division, which encourages up to 40 amateur teams (who have not previously won the Patio Porker division in the WCBCC) to enter. Only wood and charcoal cooking is allowed at the event, no gas or any other sort of heat system is allowed to be used.

Beyond those main categories, teams also compete in several other ancillary contests over the four-day event, including: Best Sauce (Tomato/Mustard/Vinegar), Frank's Red Hot Hot Wings, Kingsford Tour of Champions and Anything But (Exotic/Beef/Seafood/Poultry).

The Great American River Run made its Memphis in May debut in 2016. The race attracts runners of all experience level, featuring half marathon and 5K distances. The race course takes runners through downtown Memphis and along the banks of the Mississippi River.

The inaugural race drew over 2,000 runners from more than 30 states. Every registrant is given a race t-shirt and every finisher is awarded a medal.

901Fest made its inaugural appearance at the 2016 Memphis in May International Festival. The programming for the event is centered around local musicians, artists, vendors and includes an air show and fireworks display.

All content from Kiddle encyclopedia articles (including the article images and facts) can be freely used under Attribution-ShareAlike license, unless stated otherwise. Cite this article:
Memphis in May Facts for Kids. Kiddle Encyclopedia.