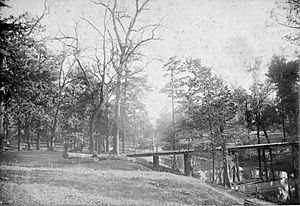 The Sunflower River Bridge in Clarksdale, 1890

Choctaw and Chickasaw Indians occupied the Delta region prior to the arrival of European settlers. Clarksdale was developed at the former intersection of two Indian routes: the Lower Creek Trade Path, which extended westward from Augusta, Georgia, to New Mexico; and the Chakchiuma Trade Trail, which ran northeastward to the former village at present-day Pontotoc, Mississippi. The first removal treaty carried out under the Indian Removal Act was the 1830 Treaty of Dancing Rabbit Creek, by which the Choctaw people ceded about 11 million acres in exchange for about 15 million acres in Indian Territory (now Oklahoma). A similar forced removal of the Chickasaw Nation began in 1837; once in Indian Territory, they paid the Choctaw US$530,000 for the westernmost part of their land.

Following the removal of the Indians, European-American settlers migrated to the Delta region, where the fertile soil was excellent for growing cotton. They brought or purchased African-American slaves to work the several cotton plantations developed in the county, always locating these on the riverfront for transportation access. John Clark founded the town in 1848 when he bought land in the area and started a timber business. Clark married the sister of James Lusk Alcorn, a major planter who owned a nearby plantation. Alcorn became a politician, elected by the state legislature as US Senator and later elected as governor of the state. Thriving from the cotton trade and associated business, Clarksdale soon earned the title "The Golden Buckle on the Cotton Belt".

African-American slaves made the plantations work and built the wealth of King Cotton in the state. U.S. Census data shows Coahoma County, Mississippi's 1860 population was 1,521 whites and 5,085 slaves. James Alcorn was a major planter, owning 77 slaves.

When slavery was abolished, many black families labored as sharecroppers. They gained some independence but were often at a disadvantage in negotiations with white planters. Historian Nicholas Lemann writes "segregation strengthened the grip of the sharecropper system by ensuring that most blacks would have no arena of opportunity in life except for the cotton fields" (p. 6). During the Reconstruction Era following the Civil War, Mississippi’s blacks and poor whites both benefited from the State's new constitution of 1868, which adopted universal suffrage; did away with property qualifications for suffrage or for office; provided for the state's first public school system; forbade race distinctions in the possession and inheritance of property; and prohibited limiting civil rights in travel.

Those gains were short-lived, as insurgent white paramilitary groups such as the Red Shirts worked to suppress black voting from 1868 on. By 1875 white Democrats took control of the state legislature in Mississippi. They later passed Jim Crow laws, including legal segregation of public facilities. A freedman named Bill Peace, who had served in the Union Army and returned to Clarksdale after the war, persuaded his former owner to allow him to form a security force to prevent theft from the plantation. On October 9, 1875, whites in Clarksdale began hearing rumors that "General Peace" was preparing his troops to plunder the town; rumors spread that he was planning to murder the whites. A white militia was formed, and they suppressed Peace’s "revolt". Across Mississippi, white militias frequently formed in response to similar fears of armed black revolt.

"Like the establishment of sharecropping, the restoration to power of the all-white Democratic Party in the South was a development of such magnitude to whites that it became encrusted in legend; many towns have their own mythic stories of the redemption of the white South. In Clarksdale it is the story of the "race riot" of October 9, 1875."

After the Reconstruction era and construction in 1879 of the Louisville, New Orleans and Texas Railway through the town, Clarksdale was incorporated in 1882. In 1886, the town's streets were laid out; it was not until 1913 that any were paved.

African Americans composed most of the farm labor in the county into the 1940s, when increasing mechanization reduced the need for field workers and thousands of blacks had left Mississippi in the Great Migration to Chicago and later, West Coast cities. They developed a rich musical tradition drawing from many strands of music, and influencing jazz and the blues in Chicago.

The movement of large numbers of people both to and from Clarksdale is prominent in the city's history. Prior to 1920, Delta plantations were in constant need of laborers, and many black families moved to the area to work as sharecroppers. After World War I, plantation owners even encouraged blacks to move from the other parts of Mississippi to the Delta region for work. By this time, Clarksdale had also become home to a multi-cultural mixture of Lebanese, Italian, Chinese and Jewish immigrant merchants. By 1920, the price of cotton had fallen, and many blacks living in the Delta began to leave. The Illinois Central Railroad operated a large depot in Clarksdale and provided a Chicago-bound route for those seeking greater economic opportunities in the north; it soon became the primary departure point for many.

During the 1940s, three events occurred which increased the exodus of African-Americans from Clarksdale. First, it became possible to commercially produce a cotton crop entirely by machine, which lessened the need for a large, low-paid workforce. (Coincidentally, it was on 28 acres of the nearby Hopson Plantation where the International Harvester Company perfected the single-row mechanical cotton picking machine in 1946; soil was prepared, seeded, picked and bailed entirely by machines, while weeds were eradicated by flame.) Second, many African American GIs returned from World War II to find slim opportunities for employment in the Delta region. Finally, there appeared an accelerated climate of racial hatred, as evidenced by the violence against such figures as NAACP representative Aaron Henry.

"The Great Migration" north became the largest movement of Americans in U.S. history, and was recounted with Clarksdale triangulated with Chicago and Washington D.C. in Nicholas Lemann's award-winning book The Promised Land: The Great Black Migration and How it Changed America. The History Channel later produced a documentary based on the book, narrated by actor Morgan Freeman, who is also a co-owner of Clarksdale’s Madidi restaurant and Ground Zero Blues Club.

Clarksdale's citizens are famous for their civil rights activism and Clarksdale's police department is equally famous for its efforts to limit these rights. On May 29, 1958, Martin Luther King visited Clarksdale for the first major meeting of the Southern Christian Leadership Conference (SCLC). In 1960, Aaron Henry, a local pharmacist, was named state president of the NAACP, and went on to organize a two-year-long boycott of Clarksdale businesses. In 1962, King again visited Clarksdale on the first stop on a region-wide tour, where he urged a crowd of 1,000 to "stand in, sit in, and walk by the thousands". 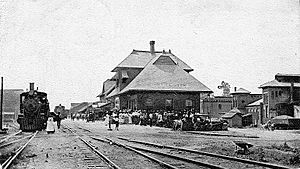 Clarksdale is located on the banks of the Sunflower River in the Mississippi Delta.

There were 7,233 households out of which 36.8% had children under the age of 18 living with them, 35.7% were married couples living together, 30.0% had a female householder with no husband present, and 29.9% were non-families. 27.1% of all households were made up of individuals and 12.1% had someone living alone who was 65 years of age or older. The average household size was 2.77 and the average family size was 3.38. 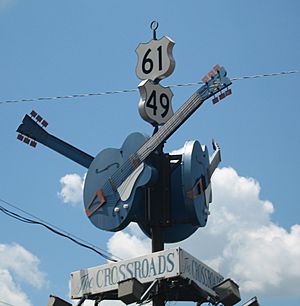 The crossroads where legend has it blues guitarist Robert Johnson sold his soul to the devil.

Clarksdale has been historically significant in the history of the blues. The Mississippi Blues Trail places interpretative markers for historic sites such as Clarksdale's Riverside Hotel, where Bessie Smith died following an auto accident on Highway 61. The Riverside Hotel is just one of many historical blues sites in Clarksdale. Early supporters of the effort to preserve Clarksdale's musical legacy included the award-winning photographer and journalist Panny Mayfield, Living Blues magazine founder Jim O'Neal, and attorney Walter Thompson, father of sports journalist Wright Thompson. In 1995, Mt. Zion Memorial Fund founder Skip Henderson, a vintage guitar dealer from New Brunswick, New Jersey and friend of Delta Blues Museum founder Sid Graves, purchased the Illinois Central Railroad passenger depot to save it from planned demolition. With the help of local businessman Jon Levingston, as well as the Delta Council, Henderson received a US$1.279 million grant from the federal government to restore the passenger depot. These redevelopment funds were then transferred on the advice of Clarksdale's City attorney, Hunter Twiford, to Coahoma County, in order to establish a tourism locale termed "Blues Alley", after a phrase coined by then Mayor, Henry Espy. The popularity of the Delta Blues Museum and the growth of the Sunflower River Blues Festival and Juke Joint Festivals has provided an economic boost to the city. 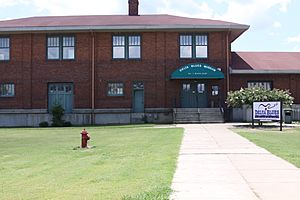 In late 1979 Carnegie Public Library Director Sid Graves began a nascent display series which later became the nucleus of the Delta Blues Museum. Graves single-handedly nurtured the beginnings of the museum in the face of an indifferent community and an often recalcitrant Library Board, at times resorting to storing displays in the trunk of his car when denied space in the library. When the fledgling museum was accidentally discovered by Billy Gibbons of the rock band ZZ Top through contact with Howard Stovall Jr., the Delta Blues Museum became the subject of national attention as a pet project of the band, and the Museum began to enjoy national recognition.

In 1995 the museum, at that time Clarksdale's only attraction, grew to include a large section of the newly renovated library building, but remained under the tight control of the Carnegie Library Board, who subsequently fired Sid Graves, at the time seriously ill. Graves died in Hattiesburg, Mississippi, in January 2005. In an interim move from the renovated Library building, the Museum spent most of 1996 in a converted retail storefront on Delta Avenue under the direction of a politically connected former Wisconsin native, the late Ron Gorsegner. In 1997-1998 Coahoma County would finally provide funds to form a separate Museum Board of Directors composed mainly of socially prominent, local white blues fans, and to renovate the adjoining Illinois Central Railroad freight depot, providing a permanent home for the Delta Blues Museum. 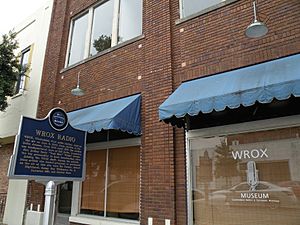 A Blues Trail marker at the WROX building in Clarksdale. The site is also list on the National Register of Historic Places.

One is located on Stovall Road at a cabin believed to have been lived in by famed bluesman McKinley Morganfield, also known as Muddy Waters. Morganfield supposedly lived there from 1915 until 1943 while he worked on the large Stovall cotton plantation before moving to Chicago after mistreatment at the hands of a Stovall overseer.

Another Blues Trail marker is located at the Riverside Hotel, which provided lodging to blues entertainers passing through the delta.

In 2009, a marker devoted to Clarksdale native Sam Cooke was unveiled in front of the New Roxy Theater.

Jimmy Page and Robert Plant named their 1998 album Walking Into Clarksdale as a tribute to the significance that Clarksdale made in the history of the Delta Blues.

All content from Kiddle encyclopedia articles (including the article images and facts) can be freely used under Attribution-ShareAlike license, unless stated otherwise. Cite this article:
Clarksdale, Mississippi Facts for Kids. Kiddle Encyclopedia.