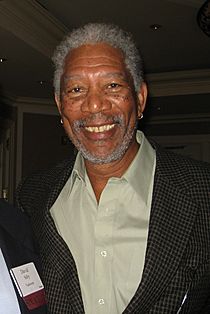 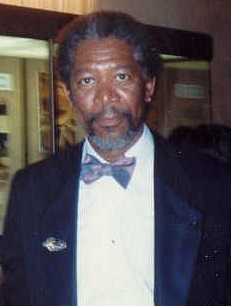 Morgan Freeman when he was younger

Morgan Freeman' (born June 1, 1937) is an American actor, producer, and narrator. Freeman won an Academy Award in 2005 for Best Supporting Actor with Million Dollar Baby (2004), and he has received Oscar nominations for his performances in Street Smart (1987), Driving Miss Daisy (1989), The Shawshank Redemption (1994), and Invictus (2009). He has also won a Golden Globe Award and a Screen Actors Guild Award.

Freeman was born in Memphis, Tennessee on June 1, 1937. He started acting when he was nine years old in a school play and at age 12 won a drama competition in his home State. Morgan worked many acting jobs until 1968 when he got his first role on Broadway in a Musical called Hello, Dolly!. He is known for his soft-spoken voice. He has donated several amounts of money to the Democratic Party. Once he stated that "Republicans scare me."

Some movies that Freeman has been in include:

All content from Kiddle encyclopedia articles (including the article images and facts) can be freely used under Attribution-ShareAlike license, unless stated otherwise. Cite this article:
Morgan Freeman Facts for Kids. Kiddle Encyclopedia.