Greenwood is a city in and the county seat of Leflore County, Mississippi, located at the eastern edge of the Mississippi Delta, approximately 96 miles north of Jackson, Mississippi, and 130 miles south of Memphis, Tennessee. It was a center of cotton planter culture in the 19th century.

The population was 16,087 at the 2010 census. It is the principal city of the Greenwood Micropolitan Statistical Area. The Tallahatchie and the Yalobusha rivers meet at Greenwood to form the Yazoo River. Throughout the 1960s, Greenwood was the site of major protests and conflicts as African Americans worked to achieve racial integration and voting access during the civil rights movement. 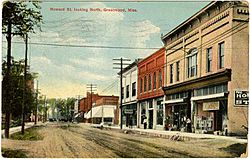 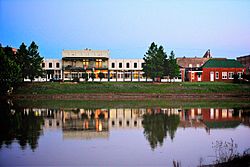 The flood plain of the Mississippi River has long been an area rich in vegetation and wildlife, fed by the Mississippi and its numerous tributaries. Long before Europeans migrated to America, the Choctaw and Chickasaw Indian nations settled in the Delta's bottomlands and throughout what is now central Mississippi. They were descended from indigenous peoples who had lived in the area for thousands of years, including the Mississippian culture, which built earthwork mounds beginning about 950CE.

In the nineteenth century, the Five Civilized Tribes in the Southeast suffered increasing encroachment on their territory by European-American settlers from the United States. Under pressure from the United States government, in 1830 the Choctaw principal chief Greenwood LeFlore and other Choctaw leaders signed the Treaty of Dancing Rabbit Creek, ceding most of their remaining land to the United States in exchange for land in Indian Territory, what is now southeastern Oklahoma. The government opened the land for sale and settlement by European Americans. LeFlore came to regret his decision to sign away his people's land, saying in 1843 that he was "sorry to say that the benefits realized from [the treaty] by my people were by no means equal to what I had a right to expect, nor to what they were justly entitled."

The first Euro-American settlement on the banks of the Yazoo River was a trading post founded in 1834 by Colonel John Dilliard and known as Dilliard's Landing. The settlement had competition from Greenwood Leflore's rival landing called Point Leflore just three miles up the Yazoo River. The rivalry ended when Captain James Dilliard donated parcels in exchange for a commitment from the townsmen to maintain an all-weather turnpike to the hill section to the east along with a Stage Road to the more established settlements to the North West. In 1844 it was incorporated as "Greenwood", named after Chief Greenwood LeFlore. Founded during a strong international demand for cotton, the city's success was based on its strategic location in the heart of the Delta: on the easternmost point of the alluvial plain and astride the Tallahatchie and the Yazoo rivers. The city served as a shipping point for cotton to major markets in New Orleans, Vicksburg, Mississippi, Memphis, Tennessee, and St. Louis. Thousands of slaves were brought as laborers to Mississippi from the Upper South, in a forced migration that moved more than one million slaves in total to the Deep South to satisfy the demand for labor, as cotton cultivation spread to these new territories of the Southeast. Greenwood continued to prosper, based on slave labor on the cotton plantations and in shipping, until the latter part of the American Civil War.

The end of the Civil War in 1865 and the following years of Reconstruction changed the labor market to one of free labor. The state was mostly undeveloped frontier, and many freedmen withdrew from working for others. In the nineteenth century, many blacks managed to clear and buy their own farms in the bottomlands. With the disruption of war and changes to labor, cotton production initially declined, reducing the city's previously thriving economy.

The construction of railroads through the area in the 1880s revitalized the city, with two rail lines running to downtown Greenwood, close to the Yazoo River, and shortening transportation to markets. Greenwood again emerged as a prime shipping point for cotton. Downtown's Front Street bordering the Yazoo filled with cotton factors and related businesses, earning that section the name Cotton Row. The city continued to prosper in this way well into the 1940s, although cotton production suffered during the infestation of the boll weevil in the early 20th century. For many years, the bridge over the Yazoo displayed the sign, "World's Largest Inland Long Staple Cotton Market".

The industry was largely mechanized in the 20th century before World War II, displacing thousands of sharecroppers and tenant farmers. Since the late 20th century, some Mississippi farmers have begun to replace cotton with corn and soybeans as commodity crops; the textile manufacturing industry shifted overseas and they can gain stronger prices for the newer crops, used mostly as animal feed.

Greenwood's Grand Boulevard was once named one of America's 10 most beautiful streets by the U.S. Chambers of Commerce and the Garden Clubs of America. Sally Humphreys Gwin, a charter member of the Greenwood Garden Club, planted the 1,000 oak trees lining Grand Boulevard. In 1950, Gwin received a citation from the National Congress of the Daughters of the American Revolution in recognition of her work in the conservation of trees.

The civil rights era in Greenwood

In 1955, following the US Supreme Court's decision in Brown v. Board of Education, ruling that segregated public education was unconstitutional, the White Citizens' Council was founded by Robert B. Patterson in Greenwood to fight against racial integration. Chapters were established across the state.

From 1962 through 1965, Greenwood was a center of protests and voter registration struggles during the Civil Rights Movement. The SNCC, COFO, and the MFDP were all active in Greenwood. During this period, hundreds of African Americans were arrested in nonviolent protests; civil rights activists were subjected to repeated violence by police and whites. In addition, whites used economic retaliation against African Americans who attempted to register to vote: they fired them from jobs, evicted them from rental housing, and cut off federal commodity subsidies in poor communities. The city police set their police dog, Tiger, on protesters while white counter-protesters yelled "Sic 'em" from the sidewalk.

The civil rights protesters in Greenwood in the mid-1960s were supported by an economic boycott organized by the Catholic peace organization Pax Christi, which had a chapter in the city. Pax Christi's ultimately successful efforts were encouraged by native Mississippian Joseph Bernard Brunini, the Bishop of Jackson. Major gains were achieved by the movement with Congressional passage of the Civil Rights Act of 1964 and Voting Rights Act of 1965.

In June 1966, James Meredith, the first African American to attend the University of Mississippi, announced that he was going to walk from Memphis, Tennessee, to Jackson, to protest racism, in a March Against Fear over a distance of more than 200 miles. He invited only men to walk with him, in a highly individualized journey. After Meredith was shot two days into his walk, a number of high-profile civil rights leaders of major organizations, including Stokely Carmichael of SNCC, Martin Luther King of the Southern Christian Leadership Conference (SCLC), Floyd McKissick, and Wilkins of the NAACP vowed to continue his protest, recruiting marchers to accompany them.

Goals differed among the various groups, and the logistics of food and shelter were more difficult to organize for larger groups. But, they negotiated and collaborated, also with some groups expanding the march to achieve community organizing and voter registration in the Delta communities which they reached. National leaders tended to come and go, checking in on the march in the midst of other responsibilities; some marchers also walked for short periods, while others stayed through most of the journey. With high-spirited gatherings and song, they recruited marchers from local residents, inviting them to join the occasion. The state had promised to provide police protection if the marchers obeyed the law. Many local whites jeered and threatened the marchers, driving near them and waving Confederate flags.

When the group reached Greenwood on June 17, Carmichael was arrested but released after a few hours. Later, in Greenwood's Broad Street Park, Carmichael gave his famous Black Power speech, stating:

This is the twenty-seventh time I have been arrested—and I ain't going to jail no more! The only way we gonna stop them white men from whuppin' us is to take over. We been sayin' "freedom" for six years and we ain't got nothin'. What we gonna start saying now is Black Power!

Among the 6,022 households 28.7% had children under the age of 18 living with them, 29.8% are married couples living together, 29.0% had a female householder with no husband present, 4.6% had a male householder with no wife present, and 36.6% were non-families. 32.5% of all households were made up of individuals living alone and 10.7% had someone living alone who was 65 years of age or older. The average household size was 2.48 and the average family size was 3.16.

Radio station WGRM on Howard Street was the location of B.B. King's first live broadcast in 1940. On Sunday nights, King performed live gospel music as part of a quartet. In memory of this event, the Mississippi Blues Trail has placed its third historic marker in this town at the site of the former radio station. Another Mississippi Blues trail marker is placed near the grave of the blues singer Robert Johnson. A Blues Trail marker notes the Elks Lodge.

Greenwood is served by Greenwood–Leflore Airport (GWO) to the east and is located midway between Jackson, Mississippi, and Memphis, Tennessee. It is about halfway between Dallas, Texas, and Atlanta, Georgia.

All content from Kiddle encyclopedia articles (including the article images and facts) can be freely used under Attribution-ShareAlike license, unless stated otherwise. Cite this article:
Greenwood, Mississippi Facts for Kids. Kiddle Encyclopedia.