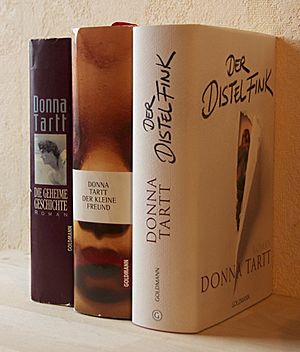 Tartt was born, the elder of two daughters, in Greenwood, Mississippi, in the Mississippi Delta, and raised in the nearby town of Grenada. Her father, Don Tartt, was a rockabilly musician, turned freeway "service station owner-cum-local politician", while her mother, Taylor, was a secretary. Her parents were avid readers, and her mother would read while driving.

“I know a ton of poetry by heart, When I was a little kid, first thing I memorized were really long poems by A. A. Milne... I also know all these things that I was made to learn. I’m sort of this horrible repository of doggerel verse.”

In 1976, aged thirteen, Tartt was published for the first time when a sonnet was included in The Mississippi Review.

In high school, Tartt was a freshman cheerleader for the basketball team and worked in the public library.

In 1981, Tartt enrolled in the University of Mississippi where her writing caught the attention of Willie Morris while she was a freshman. Finding her in the Holiday Inn bar one evening, Morris said to her, “My name is Willie Morris, and I think you’re a genius.”

Following a recommendation from Morris, Barry Hannah, then an Ole Miss writer-in-residence, admitted the eighteen-year-old Tartt into his graduate course on the short story. "She was deeply literary," said Hannah. "Just a rare genius, really. A literary star."

In 1982, following the suggestion of Morris and others, she transferred to Bennington College. At Bennington, Tartt studied classics with Claude Fredericks, and also met Bret Easton Ellis, Jonathan Lethem, and Jill Eisenstadt, graduating in 1986.

Tartt published her first novel, The Secret History in 1992. Amanda Urban as her agent, the novel became a marketing, critical, and lucrative achievement. Many considered Tartt a precocious literary genius, as she was just 29 years old, and setting high expectations for what she would publish next.

In 2002, Tartt was reportedly working on a retelling of the myth of Daedalus and Icarus for the Canongate Myth Series, a series of novellas in which ancient myths are reimagined and rewritten by contemporary authors.

In 2002, Tartt's novel The Little Friend appeared first, in Dutch, in Netherlands bookshops in the September, since more, per-capita, of her previous book was sold there than any other market.

In 2006, Tartt's short story The Ambush was included in the Best American Short Stories 2006.

Her 2013 novel The Goldfinch stirred reviewers as to whether it was a literary novel, a controversy possibly based on its best-selling status.

Tartt is a convert to Catholicism and contributed an essay, "The spirit and writing in a secular world", to The Novel, Spirituality and Modern Culture (2000). In her essay Tartt wrote that "...faith is vital in the process of making my work and in the reasons I am driven to make it". However, Tartt also warned of the danger of writers who impose their beliefs or convictions on their novels. She wrote that writers should "shy from asserting those convictions directly in their work".

She has spent about ten years writing each of her novels.

Tartt is 5 feet tall. She has said "Je ne vais jamais me marier." She has lived in Greenwich Village, the Upper East Side, and on a farm near Charlottesville, Virginia Tartt is notably private, and does not give talks at book festivals. She has stated that she participates in book tours no more than once every ten years. She has, however, also stated that her day-to-day life is not that of a recluse, and that she spends much of her time writing. Tartt talks on the phone, every day, with her mother, but has not had contact with her father since 1982.

All content from Kiddle encyclopedia articles (including the article images and facts) can be freely used under Attribution-ShareAlike license, unless stated otherwise. Cite this article:
Donna Tartt Facts for Kids. Kiddle Encyclopedia.