University of Mississippi facts for kids

The University of Mississippi (also called Ole Miss) is a university in Oxford, Mississippi. The college was founded in 1848. Its sports teams, called the Rebels, play in the Southeastern Conference. 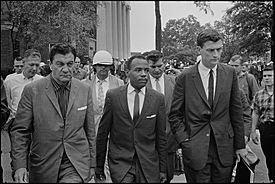 In September 1962, James Meredith won a lawsuit to secure admission to the previously segregated University of Mississippi. He attempted to enter campus on September 20, on September 25, and again on September 26. He was blocked by Mississippi Governor Ross Barnett, who said, "[N]o school will be integrated in Mississippi while I am your Governor." The Fifth U.S. Circuit Court of Appeals held Barnett and Lieutenant Governor Paul B. Johnson, Jr. in contempt, with fines of more than $10,000 for each day they refused to allow Meredith to enroll.

Attorney General Robert Kennedy sent U.S. Marshals. On September 30, 1962, Meredith entered the campus under their escort. Students and other whites began rioting that evening, throwing rocks and then shooting guns at the U.S. Marshals guarding Meredith. Two people were killed; 28 marshals suffered gunshot wounds; and 160 others were injured. After the Mississippi Highway Patrol withdrew from the campus, President John F. Kennedy sent regular US Army forces to the campus to quell the riot. Meredith began classes the day after the troops arrived.

All content from Kiddle encyclopedia articles (including the article images and facts) can be freely used under Attribution-ShareAlike license, unless stated otherwise. Cite this article:
University of Mississippi Facts for Kids. Kiddle Encyclopedia.