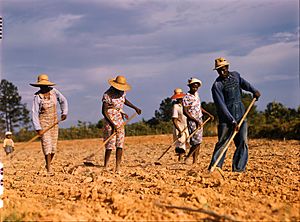 An FSA photo of a cropper family chopping the weeds from cotton near White Plains, in Georgia, US (1941).

Sharecropping is a term for when one person farms another person's land, and then the two share what is produced. Sharecroppers are almost always poor, and are often in debt to landowners or other people. Sharecropping was very common in the Southern United States after the Civil War and the end of slavery. At that time, many African-Americans sharecropped on the land that they had once farmed as slaves. Sharecropping was part of the system of "Jim Crow", which kept blacks poor and not really citizens.

Sharecropping is a system used mainly in the USA, when slavery was abolished. It is where land is bought together, worked on together, and the crops shared together.

All content from Kiddle encyclopedia articles (including the article images and facts) can be freely used under Attribution-ShareAlike license, unless stated otherwise. Cite this article:
Sharecropping Facts for Kids. Kiddle Encyclopedia.