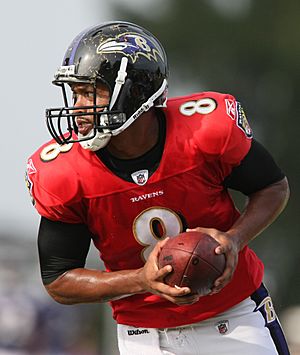 Cleotha Lemon, Jr. (born August 16, 1979 in Greenwood, Mississippi) is an American football quarterback. He currently plays for the Jacksonville Jaguars of the National Football League (NFL). He started playing in the NFL for the Baltimore Ravens in 2002. Lemon played for the San Diego Chargers from 2003 to 2005. He then played for the Miami Dolphins until the 2007 season. He played college football at Arkansas State.

All content from Kiddle encyclopedia articles (including the article images and facts) can be freely used under Attribution-ShareAlike license, unless stated otherwise. Cite this article:
Cleo Lemon Facts for Kids. Kiddle Encyclopedia.