Starkville is an anchor of the Golden Triangle region of northeast Mississippi which consists of Starkville, Columbus, and West Point.

The university is the largest employer in Starkville. Students have created a ready audience for the Magnolia Film Festival. Held every February, it is the oldest film festival in the state. Other major events held in Starkville and strongly supported by the MSU Student Body are the Dudy Gras Parade, Cotton District Arts Festival, Super Bulldog Weekend, Old Main Music Festival, Ragtime & Jazz Music Festival, and Bulldog Bash.

The Starkville area has been inhabited for over 2100 years. Artifacts in the form of clay pot fragments and artwork dating from that time period have been found east of Starkville at the Herman Mound and Village site, which is listed on the National Register of Historic Places. The village site can be accessed from the Indian Mound Campground. The earthwork mounds were made by early Native Americans of moundbuilder cultures as part of their religious and political cosmology.

Shortly before the American Revolutionary War period, the area was inhabited by the Choccuma (or Chakchiuma) tribe. They were annihilated about that time by a rare alliance between the Choctaw and Chickasaw peoples.

The modern European-American settlement of the Starkville area was started after the Choctaw inhabitants of Oktibbeha County surrendered their claims to land in the area in the Treaty of Dancing Rabbit Creek in 1830. Most of the Native Americans of the Southeast were forced west of the Mississippi River during the 1830s and Indian Removal.

White settlers were drawn to the Starkville area because of two large springs, which Native Americans had used for thousands of years. A mill on the Big Black River southwest of town produced clapboards, giving the town its original name, Boardtown. In 1835, when Boardtown was established as the county seat of Oktibbeha County, it was renamed as Starkville in honor of Revolutionary War hero General John Stark.

On March 21, 2006, Starkville became the first city in Mississippi to adopt a smoking ban for indoor public places, including restaurants and bars. This ordinance went into effect on May 20, 2006.

US Highway 82 and Mississippi Highways 12 and 25 are major roads through Starkville. The nearest airport with scheduled service is Golden Triangle Regional Airport (GTR). George M. Bryan Field (KSTF) serves as Starkville's general aviation airport. There are multiple privately owned airstrips in the area. 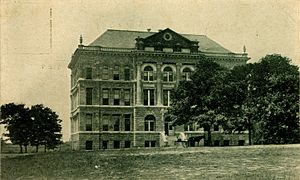 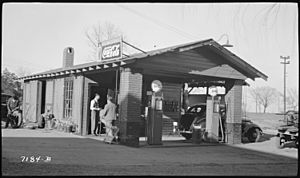 There were 9,845 households out of which 24.1% had children under the age of 18 living with them, 34.1% were married couples living together, 13.0% had a female householder with no husband present, and 50.1% were non-families. 32.1% of all households were made up of individuals and 6.3% had someone living alone who was 65 years of age or older. The average household size was 2.35 and the average family size was 2.92.

Starkville has more than 80 places of worship, which serve most religious traditions. Faculty, staff and students at Mississippi State University, including those from other nations, have greatly increased the city's diversity. As of October 2007, approximately half (49.74%) of the residents of Starkville claim a religious affiliation;; most are Christian. Of those claiming affiliation, 41.59% self-identify as Protestant, including 25% Baptist and 11% Methodist. Lower percentages identify as Catholic, Mormon, Hindu and Muslim.

The Cotton District is a community located in Starkville. It was the first new urbanism development in the world. It was founded in 2000 by Dan Camp, who is the developer, owner and property manager of much of the area. The architecture of the Cotton District has historical elements and scale, with Greek Revival mixed with Classical or Victorian. It is a compact, walkable neighborhood that contains many restaurants and bars, in addition to thousands of unique residential units.

American pilot Charles Lindbergh, the first to fly solo across the Atlantic Ocean, made a successful landing on the outskirts of Starkville in 1927 during his notable Guggenheim Tour. He stayed overnight at a boarding house in the Maben community. Lindbergh later wrote about that landing in his autobiographical account of his barnstorming days, titled WE.

Starkville is one of several places in the United States that claims to have created Tee Ball. Tee Ball was popularized in Starkville in 1961 by W.W. Littlejohn and Dr. Clyde Muse, members of the Starkville Rotarians. Dr. Muse was also an educator, having been Principal of Starkville High School for many years. He was a renowned baseball and basketball coach (one of his early teams won a State Championship.)

The town itself is called by fans the Baseball Capital of the South, having been the birthplace of National Baseball Hall of Famer Cool Papa Bell and Mississippi State University, whose Diamond Dogs have made nine trips to the NCAA Baseball College World Series in Omaha, Nebraska.

Johnny Cash was arrested for public drunkenness (though he described it as being picked up for picking flowers) in Starkville and held overnight at the city jail on May 11, 1965. This inspired his song Starkville City Jail:

They're bound to get you,

Cause they got a curfew,

And you go to the Starkville city jail.

The song appears on the album At San Quentin.

From November 2 to November 4, 2007, the Johnny Cash Flower Pickin' Festival was held in Starkville. At the festival, Cash was offered a symbolic posthumous pardon by the city. They honored Cash's life and music, and the festival is expected to become an annual event. The festival was started by Robbie Ward. He urged the town to make it an annual event. He said: "Johnny Cash was arrested in seven places, but he only wrote a song about one of those places."

A song entitled Starkville appears on the Indigo Girls' 2002 album Become You.

Starkville is shown on a map of Mississippi in the film Borat: Cultural Learnings of America for Make Benefit Glorious Nation of Kazakhstan (2007).

The Mississippi Horse Park in Starkville is a National Top 40 Rodeo Facility and is considered to be one of the top tourist attractions in North Mississippi.

Starkville has The Magnolia Independent Film Festival, held annually in February. It is the oldest festival in the state for independent films.

The annual Cotton District Arts Festival in Starkville, held in the Cotton District on the third weekend of April, is considered to be one of the top arts festivals in the state, drawing a record crowd of nearly 25,000 in 2008. On hand for the festivities were Y'all Magazine, Southern Living, Peavey Electronics, and over 100 of the state's top artisans and 25 live bands.

Located on the MSU campus, the Cullis and Gladys Wade Clock Museum has an extensive collection of mostly American clocks and watches dating to the early 18th century. The collection of over 400 clocks is the only one of its size in the region.

Starkville is mentioned in the NBC drama series, The West Wing, which aired from 1999-2006. Toby is discussing an appropriations bill, noting that it includes 1.7 million dollars for manure handling in Starkville, Mississippi.

All content from Kiddle encyclopedia articles (including the article images and facts) can be freely used under Attribution-ShareAlike license, unless stated otherwise. Cite this article:
Starkville, Mississippi Facts for Kids. Kiddle Encyclopedia.