Big Black River is a river in the U.S. state of Mississippi and a tributary of the Mississippi River. Its origin (region:US-MS&title=Big+Black+River+source 33°41′40″N 89°07′59″W﻿ / ﻿33.6944°N 89.1331°W﻿ / 33.6944; -89.1331﻿ (Big Black River source)) is in Webster County near the town of Eupora in the north central part of the state. From there it flows 330 miles (530 km) in a generally southwest direction until it merges with the Mississippi River 25 miles (40 km) south of the city of Vicksburg. It is the major contributor to the Big Black River Basin. It forms part of the northern border of Choctaw County, passes through Montgomery County, and forms the eastern border of Holmes County and the northern border of Claiborne County.

The Big Black River and most of its tributaries are silt-filled. The rivers carry large amounts of suspended sediment, resulting mostly from agricultural runoff. These tributaries are slow-flowing muddy streams. However, some are swift-flowing with sandy bottoms.

The Battle of Big Black River Bridge, fought during the Battle of Vicksburg, was part of the Vicksburg Campaign in the American Civil War. 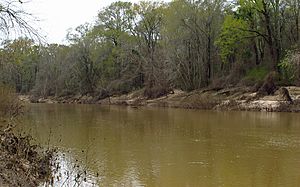 During the American Civil War, a pivotal battle between the Union and Confederate forces occurred along the Big Black River, culminating in the Siege of Vicksburg in 1863. Commanded by General Ulysses S. Grant, Union forces defeated Confederate troops under General John C. Pemberton at the Battle of Champion Hill. Grant chased Pemberton, who was headed toward Vicksburg. Pemberton left 5,000 troops to make a stand on both sides of the Big Black River after his Champion Hill defeat, while he withdrew with his main command to nearby Vicksburg.

All content from Kiddle encyclopedia articles (including the article images and facts) can be freely used under Attribution-ShareAlike license, unless stated otherwise. Cite this article:
Big Black River (Mississippi) Facts for Kids. Kiddle Encyclopedia.