Costner began his acting career with Sizzle Beach, U.S.A. (1981). Following a few minor supporting parts, he rose to prominence with his portrayal of Eliot Ness in The Untouchables (1987). This was followed by a successful period in his career with many various starring roles.

On television, Costner portrayed Devil Anse Hatfield in the miniseries Hatfields & McCoys (2012), winning the Primetime Emmy Award for Outstanding Lead Actor in a Miniseries or a Movie. Since 2018, he stars as John Dutton on drama series Yellowstone.

Costner was born in Lynwood, California, and grew up in Compton, California. His mother, Sharon Rae (Tedrick), was a welfare worker, and his father, William Costner, was an electrician and later utilities executive at Southern California Edison. His father's heritage originates with German immigrants to North Carolina in the 1700s, and Costner also has English, Irish, Scottish, and Welsh ancestry.

Costner was raised Baptist. He was not academically inclined. He enjoyed sports (especially football), took piano lessons, wrote poetry, and sang in the First Baptist Choir. He has stated that a viewing of the 1962 film How the West Was Won at the age of seven had "formed" his childhood.

Costner lived in Ventura, then in Visalia; he attended Mt. Whitney High School and moved to Orange County, where he graduated from Villa Park High School in 1973. He earned a BA in marketing and finance from California State University, Fullerton (CSUF) in 1978. While at CSUF, he became a brother in the Delta Chi Fraternity. 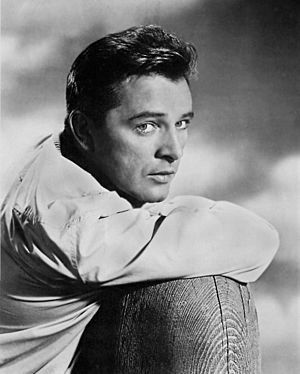 Costner became interested in acting while in his last year of college, and upon graduation he married Cindy Silva, who worked at Disneyland as Cinderella. The couple honeymooned in Puerto Vallarta; on the return plane journey, they had a chance encounter with actor Richard Burton, who had purchased all the seats around him for solitude.

Costner, who had been taking acting classes but had not told his wife about his desire to be an actor, watched Burton closely and approached when Burton gestured. After the plane landed, Burton's limousine pulled up to the curb where Costner and his wife were waiting for a taxi. Burton wished Costner good luck, and the two never met again. Costner credits Burton with partially contributing to his career. 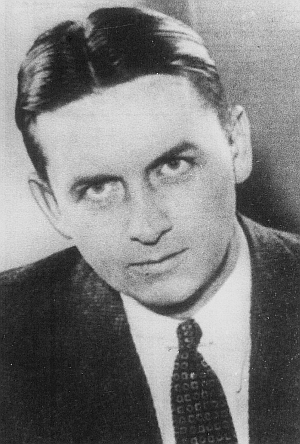 Costner achieved movie star status in 1987, when he starred as federal agent Eliot Ness in The Untouchables

Having agreed to undertake a job as a marketing executive, Costner began taking acting lessons five nights a week, with the support of his wife. His marketing job lasted 30 days. He took work which allowed him to develop his acting skills via tuition, including working on fishing boats, as a truck driver, and giving tours of stars' Hollywood homes to support the couple while he also attended auditions.

Costner made his film debut in the film Sizzle Beach, U.S.A. (known originally as Hot Malibu Summer). Filmed in the winter of 1978–79, the film was not released until 1981 and re-released in 1986. Costner made a brief appearance in the Ron Howard film Night Shift (1982). 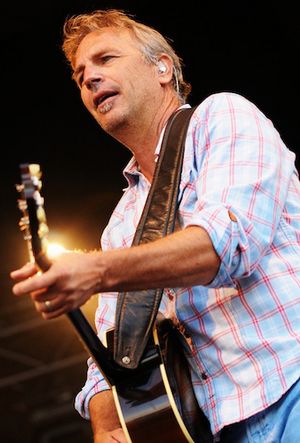 Costner is the singer in Kevin Costner & Modern West, a country rock band which he founded with the encouragement of his wife Christine. In October 2007, they began a worldwide tour which included shows in Istanbul and Rome. The group also performed at NASCAR Sprint Cup Series races at Daytona International Speedway and Charlotte Motor Speedway in Concord, North Carolina.

The band released a country album, Untold Truths in 2008 on Universal South Records. The album peaked at No. 61 on the Billboard Top Country Albums and No. 35 on the Top Heatseekers chart. Three singles have been released to radio. For the single "Superman 14" a live music video was made.

In 2009, they went on tour with opening act The Alternate Routes. In August, at the Big Valley Jamboree in Camrose, Alberta, Costner and the band were scheduled next on stage when a severe thunderstorm struck, collapsing the stage and stands on the main stage. 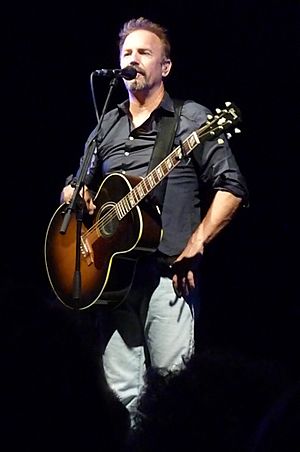 One person was reported dead and forty injured. Later, an auction was held to raise money for the family of the woman killed. A dinner with Costner was auctioned off for $41,000. Two guitars, one autographed by Costner, helped raise another $10,000 each.

A second Kevin Costner and Modern West album, Turn It On, was released in February 2010 in Europe and was supported by a European tour. In July 2012, the band performed in Halifax, Nova Scotia, at the 20th annual Telus World Skins Game in support of the IWK Health Centre Foundation, donating a guitar personally autographed by Costner.

Costner serves on an honorary board for the National World War I Museum in Kansas City, Missouri. In spring 2011, he recorded two radio spots for the museum that were aired on Kansas City Royals Radio Network. 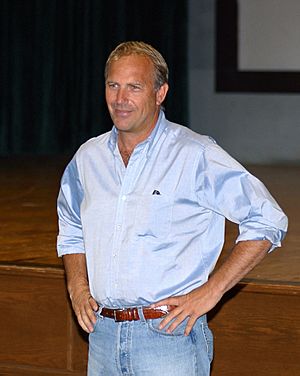 In 1995, Costner began developing oil separation machines based on a patent he purchased from the US government. The machines developed by the company were of little commercial interest until the Deepwater Horizon oil spill, when BP took six of the machines from a company in which Costner owned an interest, Ocean Therapy Solutions, for testing in late May 2010. On June 16, 2010, BP entered into a lease with Ocean Therapy Solutions for 32 of the oil-water separation devices. 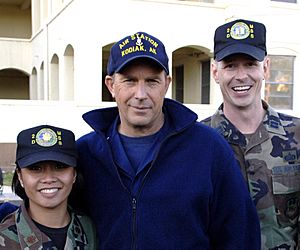 Kevin Costner with a group of U.S. Air Force airmen 2006

On June 6, 2004, Costner opened Tatanka: The Story of the Bison one mile south of Deadwood, South Dakota, on U.S. Route 85, for an educational and emotional place for people to learn about America's westward expansion. Promoters stated in a news release that the $5-million attraction had a new, 3,800-square-foot interactive center featuring exhibit, retail, and food and beverage areas, as well as offices and a small orientation theater. The visitor center features graphics, photographs, and text describing how bison came to North America and how Native American tribes used the animals for food, clothing, shelter, and other needs. The encampment features living Lakota interpreters of history, dressed in period attire and settled among their tipis. 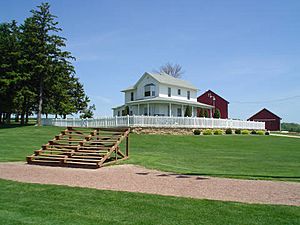 Several of Costner's films have included a baseball theme: Chasing Dreams, Bull Durham, Field of Dreams, For Love of the Game, and The Upside of Anger, in three of which his character is a pro baseball player and one a former pro baseball player.

Costner has a home in Austin, Texas, and sometimes appears at Texas Longhorns baseball practices and games. He was a close friend of former Longhorns baseball coach Augie Garrido from Garrido's days coaching at Cal State Fullerton, Costner's alma mater. 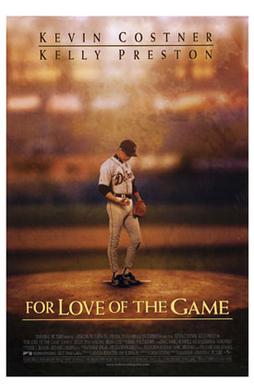 Poster for For Love of the Game

He cast Garrido to play the role of the Yankee manager in For Love of the Game. He tries to attend every College World Series game that CSUF Titans plays in Omaha, Nebraska. Costner walked-on for a try-out, but did not make the team early in his time at the university.

Costner was a partial owner of the Zion, Illinois-based Lake County Fielders independent baseball team in the North American League. The Fielders name was an homage to Field of Dreams, with the logo showing a ballplayer standing amid a field of corn. 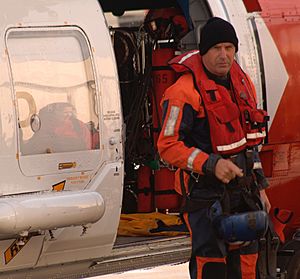 Costner was named ceremonial Grand Marshal of the NASCAR Cup Series' Auto Club 500 which took place on February 25, 2007, at the California Speedway. In 2008, he worked with the NASCAR Media Group and CMT Films to help produce the NASCAR Documentary The Ride of Their Lives which was be released in 2009. Costner was be the narrator for that documentary.

Also in 2009, he was named the spokesman for NASCAR Day which took place on 15 May. The next day, 16 May, he and his country music band would perform in the infield of Charlotte Motor Speedway as well as participate as a judge in the 2nd annual Victory Challenge before the 25th Running of the NASCAR Sprint All-Star Race. 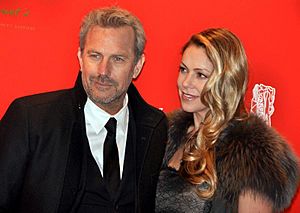 Costner in 2013 with Christine Baumgartner

While in college, Costner started dating fellow student Cindy Silva in March 1975, and in they married three years later, they had three children. The couple divorced in 1994 after 16 years of marriage.

He has a son with Bridget Rooney, with whom he had a brief relationship following his divorce, and then dated Birgit Cunningham. In 1996, he lived with supermodel Elle Macpherson.

On September 25, 2004, Costner married his girlfriend of four years, model and handbag designer Christine Baumgartner, at his ranch in Aspen, Colorado, they have three children.

American actor, director, and producer Kevin Costner has won two Academy Awards among a list of many other awards. The following is a list of films in which he has appeared:

All content from Kiddle encyclopedia articles (including the article images and facts) can be freely used under Attribution-ShareAlike license, unless stated otherwise. Cite this article:
Kevin Costner Facts for Kids. Kiddle Encyclopedia.