The Deepwater Horizon oil spill was an industrial disaster that began on 20 April 2010, in the Gulf of Mexico on the BP-operated Macondo Prospect, considered to be the largest marine oil spill in the history of the petroleum industry and estimated to be 8 to 31 percent larger in volume than the previous largest, the Ixtoc I oil spill, also in the Gulf of Mexico. The U.S. federal government estimated the total discharge at 4.9 Mbbl (210 million US gal; 780,000 m3). After several failed efforts to contain the flow, the well was declared sealed on 19 September 2010. Reports in early 2018 indicated that the well site was still leaking. The Deepwater Horizon oil spill is regarded as one of the largest environmental disasters in American history.

A massive response ensued to protect beaches, wetlands and estuaries from the spreading oil utilizing skimmer ships, floating booms, controlled burns and 1.84×10^6 US gal (7,000 m3) of oil dispersant. Due to the months-long spill, along with adverse effects from the response and cleanup activities, extensive damage to marine and wildlife habitats and fishing and tourism industries was reported. In Louisiana, 4,900,000 lb (2,200 t) of oily material was removed from the beaches in 2013, over double the amount collected in 2012. Oil cleanup crews worked four days a week on 55 mi (89 km) of Louisiana shoreline throughout 2013. Oil continued to be found as far from the Macondo site as the waters off the Florida Panhandle and Tampa Bay, where scientists said the oil and dispersant mixture is embedded in the sand. In April 2013, it was reported that dolphins and other marine life continued to die in record numbers with infant dolphins dying at six times the normal rate. One study released in 2014 reported that tuna and amberjack that were exposed to oil from the spill developed deformities of the heart and other organs that would be expected to be fatal or at least life-shortening and another study found that cardiotoxicity might have been widespread in animal life exposed to the spill.

Numerous investigations explored the causes of the explosion and record-setting spill. The U.S. Government report, published in September 2011, pointed to defective cement on the well, faulting mostly BP, but also rig operator Transocean and contractor Halliburton. Earlier in 2011, a White House commission likewise blamed BP and its partners for a series of cost cutting decisions and an inadequate safety system, but also concluded that the spill resulted from "systemic" root causes and "absent significant reform in both industry practices and government policies, might well recur".

In November 2012, BP and the United States Department of Justice settled federal criminal charges, with BP pleading guilty to 11 counts of manslaughter, two misdemeanors, and a felony count of lying to Congress. BP also agreed to four years of government monitoring of its safety practices and ethics, and the Environmental Protection Agency announced that BP would be temporarily banned from new contracts with the US government. BP and the Department of Justice agreed to a record-setting $4.525 billion in fines and other payments. As of 2018[update], cleanup costs, charges and penalties had cost the company more than $65 billion.

In September 2014, a U.S. District Court judge ruled that BP was primarily responsible for the oil spill because of its gross negligence and reckless conduct. In April 2016, BP agreed to pay $20.8 billion in fines, the largest corporate settlement in United States history.

Effects on the U.S. oil industry

On May 27, 2010, U.S. President Barack Obama temporarily stopped new drilling for offshore oil rigs. He also made new safety rules to try to stop other oil spills from happening. British Petroleum (BP Oil) owned the Deepwater Horizon oil rig. This company was mostly responsible for the damage caused by the oil spill. They paid out several billions of dollars to help people who could not work after the oil spill and to pay for cleanup efforts. 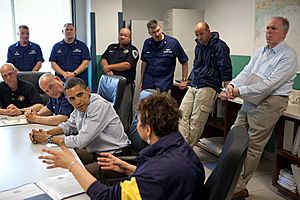 Information in this section is from Upton, Harold F. The Deepwater Horizon Oil Spill and the Gulf of Mexico Fishing Industry. Congressional Research Service Report for Congress, February 17, 2011, and the references it contains.

On May 3, 2010, The Gulf Coast Claims Center began to pay for emergency help to businesses and people (such as fishermen) who could not work because of the oil spill. By the end of August, 2010, The Gulf Coast Claims Center had paid more than $395 million. About one third of this money was paid to the fishing industry. A By February, 2011, the GCCF had paid about $751 million to people in the business of fishing. People will have three years to figure their costs and ask GCCF for payment.

BP also started a program, called the Vessels of Opportunity Program, to hire local people (who would have been fishing) to use their boats to help clean up the spilled oil. However the program made little or no impact on the spill as the vessels were not fitted with recovery equipment.

There are more ways for those in the U.S. fishing industry to get paid back for money they lost because of the Gulf oil spill. For example, the Oil Spill Liability Trust Fund was started after the 1989 Exxon Valdez oil spill to help people hurt by oil spills. Another law, the Magnuson-Stevens Fishery Conservation and Management Act lets the U.S. government give help when the Secretary of Commerce sees that all the fishing has failed in one place.

Effects on the fishing business 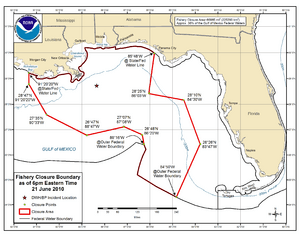 On May 2, 2010, 12 days after the blow up and fire of the Deepwater Horizon, the National Oceanic and Atmospheric Administration (NOAA) closed 6,817 square miles of the Gulf of Mexico to fishing. The reason was to make sure that seafood that might be poisoned by the oil would not be sold and maybe make people sick. The U.S. government closed large areas to fishing from the middle of the Atchafalaya Bay of Louisiana, across the coasts of Mississippi and Alabama, and as far as Panama City in Florida. State waters were also closed to fishing in much of the same area. The largest area closed to fishing was 88,522 sq. miles (229,270 km2) on June 2, 2010. By the end of November, 2010, most of the waters were opened to fishing again, with only 1041 sq miles (2697 km2) still closed. However, there was still some oil residue to be found. For example, tar balls were sometimes found in shrimper’s nets. 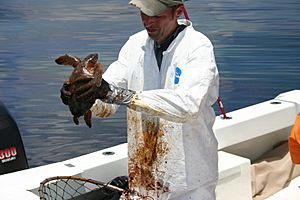 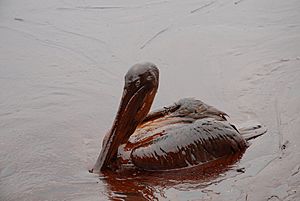 Some animals and plants were hurt by the Gulf oil spill. Scientists found dead, oil-covered animals such as birds, fish, shrimp, and oysters. Large, decaying fish covered in the thick, dark oil washed up on some beaches. The National Oceanic and Atmospheric Administration (NOAA) found 1,746 birds. 1,014 of these birds had oil on them, 997 were dead, and 749 were alive. The NOAA also found 528 sea turtles, with 400 dead, and 128 alive. The NOAA found 51 mammals, including dolphins, with 47 dead and 4 alive. Some scientists cut open dead fish to look at the inside and found the oil was inside the gills and the heart.

Because fishing was stopped, many small fishing supply stores could not make money. The fishing companies did not have enough fish and lost customers. Normally, lots of people travel to this area to fish for fun. Because of the oil spill, fewer people traveled there. Therefore, travel businesses and people who help the visitors also lost money.

East of Mobile Bay damage from oil spill cleanup crews and vehicles caused more damage to the fragile dune habitat than the oil spill itself. Dune habitats can be destroyed by nothing more than light foot traffic and in no way can support the egress of 100's of vehicles being deployed. Despite large amounts of supporting evidence, BP still denies this and apparently has persons editing and or reverting Wikipedia articles in order to cover up collateral problems associated with the accident. 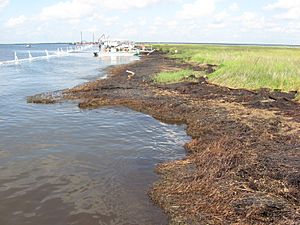 Scientists have thought about how much the plants and animals in the Gulf of Mexico would be changed after the oil spill. In general, chemicals in oil can hurt fish and shellfish. In the early life stages, many kinds of fish grow near the shore. Therefore, oil at the shore might change how many fish there are in future years. Also, affected species are part of a food web or provide living areas for other kinds. These things are possible, but there are not yet many actual data of how the fish and shellfish are doing after the oil spill. Most of the shrimp grow in one year. Therefore, changes in the number of shrimp caused by the Gulf oil spill will be known one or two years after the spill. It takes years for many kinds of fish to grow large enough to keep for food. Therefore, it will take years to know the effects of the Gulf oil spill on the very small fish.

The NOAA is still helping animals hurt by the Gulf oil spill. However, not many more are being reported. Instead, the NOAA is spending more time letting wildlife go back into the ocean. For example, sea turtles that were saved from the oil are being let back into the wild ocean. NOAA scientists on research boats have also been measuring whether it is now safe to eat fish from the Gulf (they have found that it is safe).

Counting done by Dauphin Island Sea Lab after the oil spill off the coasts of Mississippi and Alabama found that there were actually more of some kinds of fish a few months after the oil spill. Some scientists think that the closing of fishing areas kept the total number of fish high in spite of the oil spill.

One-third of the oysters sold in the United States come from Louisiana. However, the places where oysters grow have been hurt by recent hurricanes, higher than usual amounts of fresh water coming down the rivers (oysters need salt water) and also the Gulf oil spill. The Louisiana Division of Wildlife and Fisheries have been working with scientists at universities on better ways to grow oysters. Also, in June, 2011, more than 100 million oyster seeds and 500,000 baby oysters were put in test areas to help the oyster areas to grow back.

The US National Marine Fisheries Service thinks that the 2011 brown shrimp harvest from waters off of Mississippi and Louisiana will be only a little bit lower than usual. It is expected to be a much better harvest than in 2010 after the oil spill. Weather in the spring of 2011 was good for growing conditions for the brown shrimp.

All content from Kiddle encyclopedia articles (including the article images and facts) can be freely used under Attribution-ShareAlike license, unless stated otherwise. Cite this article:
Deepwater Horizon oil spill Facts for Kids. Kiddle Encyclopedia.