A salt marsh or saltmarsh, also known as a coastal salt marsh or a tidal marsh, is a coastal ecosystem in the upper coastal intertidal zone between land and open saltwater or brackish water that is regularly flooded by the tides. It is dominated by dense stands of salt-tolerant plants such as herbs, grasses, or low shrubs. These plants are terrestrial in origin and are essential to the stability of the salt marsh in trapping and binding sediments. Salt marshes play a large role in the aquatic food web and the delivery of nutrients to coastal waters. They also support terrestrial animals and provide coastal protection. 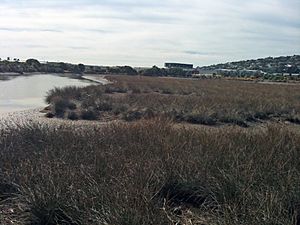 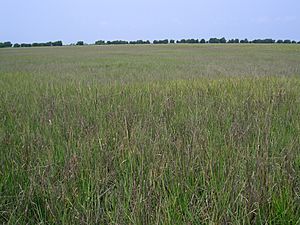 Salt marshes occur on low-energy shorelines in temperate and high-latitudes which can be stable, emerging, or submerging depending if the sedimentation is greater, equal to, or lower than relative sea level rise (subsidence rate plus sea level change), respectively. Commonly these shorelines consist of mud or sand flats (known also as tidal flats or abbreviated to mudflats) which are nourished with sediment from inflowing rivers and streams. These typically include sheltered environments such as embankments, estuaries and the leeward side of barrier islands and spits. In the tropics and sub-tropics they are replaced by mangroves; an area that differs from a salt marsh in that instead of herbaceous plants, they are dominated by salt-tolerant trees.

Most salt marshes have a low topography with low elevations but a vast wide area, making them hugely popular for human populations. Salt marshes are located among different landforms based on their physical and geomorphological settings. Such marsh landforms include deltaic marshes, estuarine, back-barrier, open coast, embayments and drowned-valley marshes. Deltaic marshes are associated with large rivers where many occur in Southern Europe such as the Camargue, France in the Rhone delta or the Ebro delta in Spain. They are also extensive within the rivers of the Mississippi Delta in the United States. In New Zealand, most salt marshes occur at the head of estuaries in areas where there is little wave action and high sedimentation. Such marshes are located in Awhitu Regional Park in Auckland, the Manawatu Estuary, and the Avon-Heathcote Estuary in Christchurch. Back-barrier marshes are sensitive to the reshaping of barriers in the landward side of which they have been formed. They are common along much of the eastern coast of the United States and the Frisian Islands. Large, shallow coastal embayments can hold salt marshes with examples including Morecambe Bay and Portsmouth in Britain and the Bay of Fundy in North America.

Salt marshes are sometimes included in lagoons, and the difference is not very marked; the Venetian Lagoon in Italy, for example, is made up of these sorts of animals and or living organisms belonging to this ecosystem. They have a big impact on the biodiversity of the area. Salt marsh ecology involves complex food webs which include primary producers (vascular plants, macroalgae, diatoms, epiphytes, and phytoplankton), primary consumers (zooplankton, macrozoa, molluscs, insects), and secondary consumers.

The low physical energy and high grasses provide a refuge for animals. Many marine fish use salt marshes as nursery grounds for their young before they move to open waters. Birds may raise their young among the high grasses, because the marsh provides both sanctuary from predators and abundant food sources which include fish trapped in pools, insects, shellfish, and worms.

Saltmarshes across 99 countries (essentially worldwide) were mapped by Mcowen et al. 2017. A total of 5,495,089 hectares of mapped saltmarsh across 43 countries and territories are represented in a Geographic Information Systems polygon shapefile. This estimate is at the relatively low end of previous estimates (2.2–40 Mha). The most extensive saltmarshes worldwide are found outside the tropics, notably including the low-lying, ice-free coasts, bays and estuaries of the North Atlantic which are well represented in their global polygon dataset.

The formation begins as tidal flats gain elevation relative to sea level by sediment accretion, and subsequently the rate and duration of tidal flooding decreases so that vegetation can colonize on the exposed surface. The arrival of propagules of pioneer species such as seeds or rhizome portions are combined with the development of suitable conditions for their germination and establishment in the process of colonisation. When rivers and streams arrive at the low gradient of the tidal flats, the discharge rate reduces and suspended sediment settles onto the tidal flat surface, helped by the backwater effect of the rising tide. Mats of filamentous blue-green algae can fix silt and clay sized sediment particles to their sticky sheaths on contact which can also increase the erosion resistance of the sediments. This assists the process of sediment accretion to allow colonising species (e.g., Salicornia spp.) to grow. These species retain sediment washed in from the rising tide around their stems and leaves and form low muddy mounds which eventually coalesce to form depositional terraces, whose upward growth is aided by a sub-surface root network which binds the sediment. Once vegetation is established on depositional terraces further sediment trapping and accretion can allow rapid upward growth of the marsh surface such that there is an associated rapid decrease in the depth and duration of tidal flooding. As a result, competitive species that prefer higher elevations relative to sea level can inhabit the area and often a succession of plant communities develops.

All content from Kiddle encyclopedia articles (including the article images and facts) can be freely used under Attribution-ShareAlike license, unless stated otherwise. Cite this article:
Salt marsh Facts for Kids. Kiddle Encyclopedia.